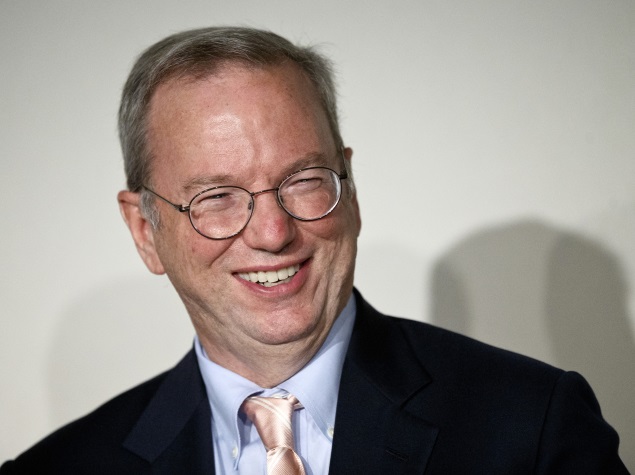 "We're going to end up breaking the Internet," warned Google Inc.'s Schmidt during a public forum Wednesday convened by U.S. Sen. Ron Wyden, D-Ore., who has been an outspoken critic of electronic data-gathering by the National Security Agency. Schmidt and executives from Facebook Inc, Microsoft Corp. and other firms say revelations of extensive NSA surveillance are prompting governments in Europe and elsewhere to consider laws requiring that their citizens' online data be stored within their national borders.

Rules like that would drive up costs and create technical obstacles to the way the Internet currently operates, making it "profoundly difficult in terms of our ability to deliver services," said Facebook general counsel Colin Stretch. Brad Smith, general counsel for Microsoft, said some European customers are worried their data will be more vulnerable to U.S. government snooping, although he declined to give specific examples.

"The reality is this is a real problem for American tech companies," said Smith. "If trust falls, then the prospects for business are hurt."

Wyden, a member of the Senate Intelligence Committee and chairman of the Finance Committee, convened the roundtable in the Palo Alto High School gym, where he played basketball as a student in the 1960s. He said he will take the executives' message back to Washington, where bills to curb surveillance have stalled. Prospects for passing a reform bill this fall are shrinking, Wyden told The Associated Press.

"I'm going to my best to use this. What I'm going to do is say there's a clear and present danger to the Internet economy," Wyden said.

Wyden contends that the government's "digital dragnet" of phone calls, emails and online communications doesn't make the country safer, and only hurts the U.S. economy.

"When the actions of a foreign government threaten red-white-and-blue jobs, Washington gets up at arms. But, even today, almost no one in Washington is talking about how overly broad surveillance is hurting the U.S. economy," he said in opening remarks.

Microsoft's Smith acknowledged that concerns over recent terrorist incidents in the Middle East may have undercut some public support for surveillance reform. However, he contends that "laws that the rest of the world doesn't respect will ultimately undermine the fundamental ability of our own legal processes, law enforcement agencies and even the intelligence community itself."

When former NSA contractor Edward Snowden made details of NSA surveillance tactics public, tech executives and industry experts warned that consumers and business customers would fear that U.S. technology companies can't protect sensitive data from government prying. Some analysts estimated last year that U.S. tech companies could lose tens of billions of dollars in sales, particularly after European firms began marketing themselves as being more secure than U.S. competitors - or less vulnerable to legal demands from the U.S. government.

Most of the impact has been anecdotal, however. A few companies, including Cisco Systems Inc. and Qualcomm Inc., have said they believe they lost some deals in China and other emerging markets because of concerns about U.S. spying. Germany did cancel a contract with Verizon this summer, citing a fear that it may provide customer phone records to the NSA. Some tech startups and telecommunications companies in France and Switzerland have claimed an increase in sales to customers who are wary of U.S. providers.

It's difficult to quantify the losses because "companies don't always know about the deals that they weren't invited to be a part of," said Daniel Castro, a senior analyst at the nonprofit Information Technology and Innovation Foundation in Washington, D.C. Castro estimated last year that losses to U.S. tech companies could amount to $35 billion by 2016. He said this week his estimate is still valid.

Wyden has called for strict controls on the NSA and complains that a pending reform bill, authored by Sen. Patrick Leahy, D-Vt., doesn't go far enough to restrict so-called "back-door" or warrantless searches of emails and online communications by Americans. The Obama administration has endorsed the Leahy bill, while defending government surveillance programs as narrowly defined and necessary for tracking foreign terrorist suspects. Wyden is backing separate legislation that would increase the authority of the government's new Privacy and Civil Liberties Oversight Board.

A coalition of leading online companies including Google, Facebook, Apple and Microsoft continue to urge Congress to pass reform. The companies also have beefed up their own security measures, through encryption and other methods intended to rebuff snooping by individual hackers - or government agencies.