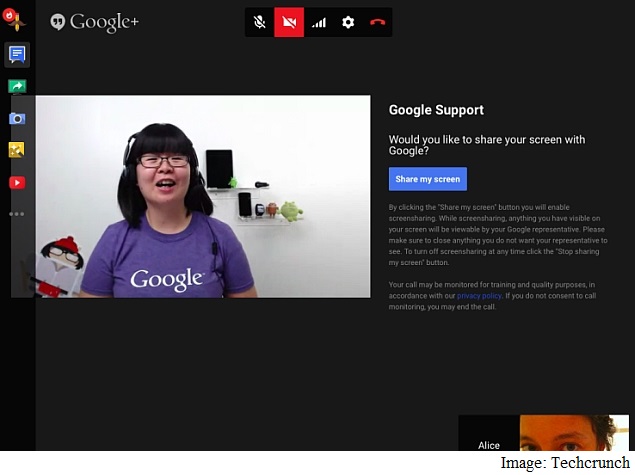 Google, after introducing its Helpouts service for users in 2013, is testing the further expansion of the Hangouts-based video chat platform to potential customers of devices on Google Play.

The search giant has confirmed it is testing the service to Techcrunch, saying it has not been rolled out globally. The service is for those users who are planning to buy those Google smartphones, tablets and Chromebooks listed on the Google Play store's Devices section, and need an expert's opinion before sealing the deal. In addition, the video chat service is free unlike the previously announced Helpouts service.

The free video chat service, which is said to have been under testing since November last year, can be accessed from Google Play's Devices section in the US, from 6am to 6pm PST. Users can select the help icon at the top right corner, and if they indicate they are interested in buying the product, they can choose to make video call if interested in some extra advice from Google Device Experts before buying.

Speaking with Techcrunch, a Google spokesperson said, "We're in a limited trial of an experimental support feature and gathering feedback, so we aren't ready to share full plans yet."

The report cites other sources to say that Google might be planning to extend the service both virtually and physically in future, with the latter implying a video chat kiosk at major retail stores that will provide similar functions to Apple's Genius Bar initiative available at Apple Stores. "They are also planning to go into retail stores with a virtual help desk to enhance the shopping experience," said the source to Techcrunch.

It is worth mentioning that the service is powered by a firm named Milestone Technologies, which is also a partner of Apple, Cisco, Palo Alto Networks and others for offering IT services, contact service centres and more.

As Android Police notes, the video chat service by Google is nothing especially new, and the expansion of the service to retail stores is similar to what Apple and Samsung also offer at retail stores such as Best Buy, where they have small kiosks to deliver expert advice.

Automobile Manufacturers Fail to Fully Protect Against Hacking: Report
BSNL and MTNL Will Not Participate in Upcoming Spectrum Auction