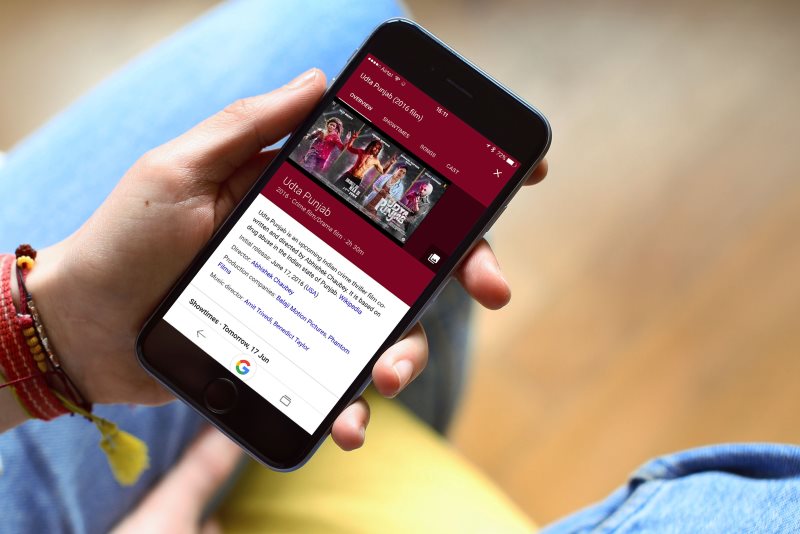 Understanding the importance of Indian cinema - with Bollywood at its heart - in the lives and culture of its audiences, Google has unveiled improvements to its search algorithm that will help users answer queries such as "Where can I see Udta Punjab?" among endless others.

The search engine will now provide rich, contextual cards in bold text - for complex Bollywood specific queries such as "What movies are Anupam Kher and Varun Dhawan in together?" - or colourful Google Now-style cards for more generic questions such as "the cast of Kal Ho Naa Ho" - or a carousel design for when the answer is a list - "Kapoor family tree". Did you know Kareena Kapoor is the great-granddaughter of Prithviraj Kapoor?

"Google has a long history of building products for India, and we wanted to make sure that when these millions of Indian cinema fans pick up their phone and ask Google about their favourite films, actors or songs, they get a delightful, local experience" Sapna Chadha, marketing head for Google India, said in a statement.

All the information is powered by the company's famed Knowledge Graph which indexes and pulls in data from all over the Web to answer questions about films, actors, song lyrics, film trivia, trailers, screening times and a lot more. The improvements work for Bollywood, Tollywood, and others regional cinema.

And at an event in Mumbai on Thursday, the company invited producer and director Karan Johar to lift the lid on the new additions to search. The company also showcased a short film - "a tribute to Indian cinema" - that were meant to display the power of the improvements.

Titled "The Hero", the six-minute video tracks the journey of a father and son as the latter tries to heal an old wound by using Google's search power. From finding the shooting location of the 1975 classic Sholay to re-enacting scenes from 2001's Dil Chahta Hai and 2006's Rang De Basanti, the duo embark on a cross-country trip, helped in part by Google's cinema-tailored search algorithms.

According to Google, around 1 in every 10 mobile searches in India is related to Indian cinema, and the latest efforts seem to signal an interest from the search giant in building upon that volume.