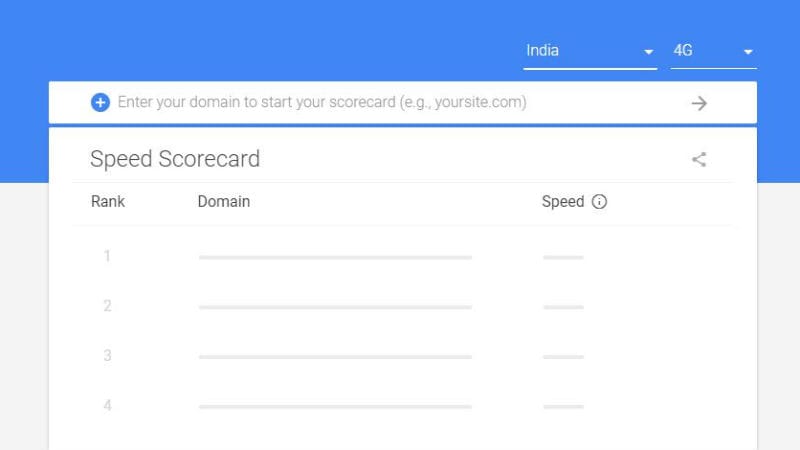 Google has announced two new tools to help mobile sites better their user experiences. At the Mobile World Congress in Barcelona, the search giant introduced Speed Scorecard, which is a comparison tool, and Impact Calculator, which calculates the revenue impact of speed for a site. Google says most businesses struggle with slow mobile sites and that is the key reason it is making efforts to provide "faster and better digital experiences" to consumers.

In a blog post, Google notes 53 percent of site visits are abandoned if they take more than three seconds to load, as per data from 2016. With the new mobile Speed Scorecard tool, site owners can check out how fast their sites load compared to other similar sites. The Scorecard is powered by the Chrome User Experience Report, which features "the largest database of real-user latency data for how Chrome users experience popular destinations on the web." It shows the speeds of thousands of sites from 12 countries across the world, says Google.

Google recommends that a site should be able to load and become usable within five seconds on mid-range smartphones with 3G connections and within three seconds on 4G connections.

Meanwhile, Google also detailed the Impact Calculator that quantifies the likely revenue impact of a site's speed. It says, "A slow mobile site doesn't just frustrate your customers, it can limit your business." Google claims that every one-second delay in page load time leads to 20 percent fall in conversions. With a few inputs, the calculator estimates the monetary impact that could result from improving the speed of a mobile site. Site owners can see how much they can gain by reducing load time by, for example, two seconds versus one second.

Google has been focusing on speed for quite a while now. Last month, it announced that it will start considering page speed while ranking websites in mobile searches. Google's 'Speed Update', where it promised to lower the rankings of slow webpages, will be in effect starting from July 2018.