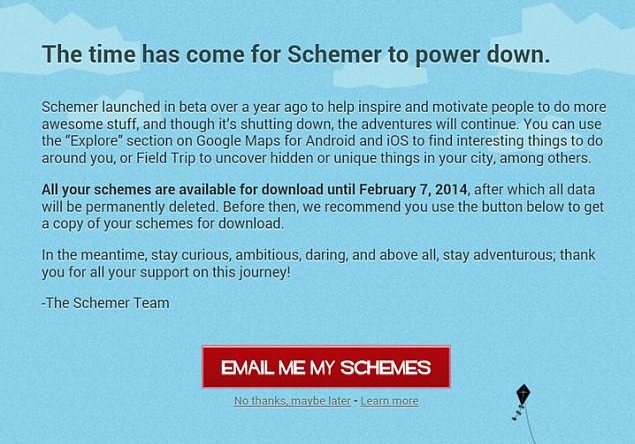 Google has finally decided to shut down its goal-sharing service, Google Schemer. The service was launched in beta over two years ago, at the end of 2011.

Google Schemer is a service for sharing goals and discussing them with other people. The service is aimed at ensuring users 'always have a scheme up [their] sleeve', whether by discussing plans with fellow Schemers who've done something similar, or getting ideas for things to do.

Google had initially kept the service to as an invite-only one. Unfortunately, the service failed to impress people and it didn't have the expected traction as well. Signed in users are shown this message (seen above), and informed that will be able to download their 'schemes' until February 7, 2014, after which, they will be permanently deleted. A simple 'Email me my schemes' button is provided to do the deed. As a migration path for users still wanting to 'Scheme', Google is suggesting they use 'Explore' section on Google Maps, or its Field Trip app, to find interesting things to do around them.

The search giant also announced it has updated Google Drive, adding the 'activity stream' feature. The company detailed the update on in its official Enterprise blog.

Google says that the update will start to rollout from January 14, 2014. The service is basically a feed which helps users review every action taken on their shared files and folders.

When the service rolls out, users will notice an 'i' button in the top right corner of their Google Drive home page, which says 'Details and activity' when rolled-over. Pressing upon the button, the activity stream will appear, displaying which user has taken which action on shared files and folders in 'My Drive'.

Specifically, users will be able to activities such as moving or removing, renaming, uploading or adding, sharing or unsharing, editing or commenting. Users can see detailed activities on each file and folder as well, by selecting them in the My Drive pane while having the activity stream. More details about the activity stream feature can be found on the Google Drive support page.