What to Watch: Google Search Makes It Easier to Find New TV Shows, Movies in India

You just need to ask for “good shows to watch” or “what to watch” on Google to get suggestions. 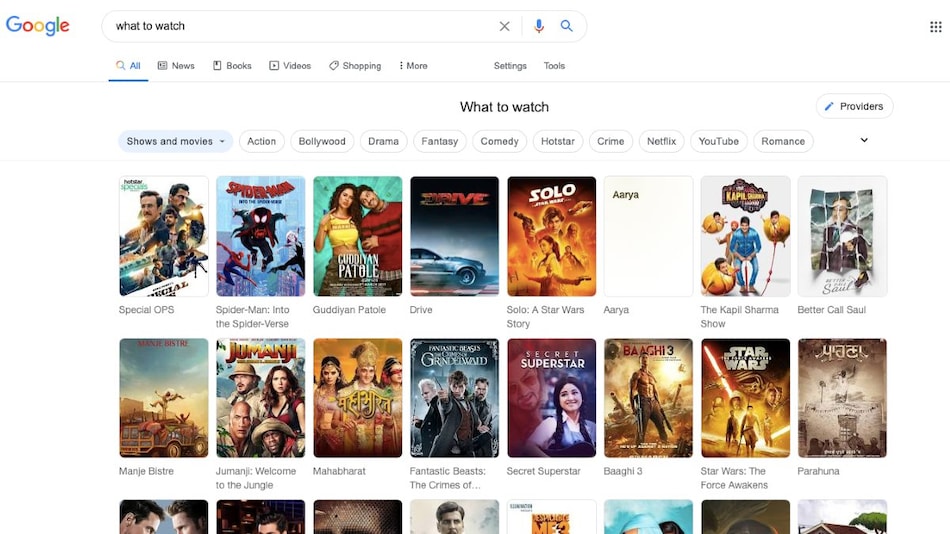 Google Search has enabled a new experience for users in India, enabling to find what TV shows or movies they can watch today. The new search experience provides an organised set of suggestions from various streaming providers including Disney+ Hotstar, Google Play Movies & TV, Netflix, SonyLIV, Voot, and YouTube. Users can also get personalised recommendations by choosing their over-the-top (OTT) subscription after tapping the Edit Providers button from the search results page. Furthermore, Google app users have provided the option to save shows and movies for later using a ‘Watchlist' feature. Read on to know more about Google's new feature.

The latest experience is rolling out on Google Search starting today in Hindi, Marathi, Telugu, Kannada and English, with additional languages to follow. It initially provides results from six OTT providers, namely Disney+ Hotstar, Google Play Movies & TV, Netflix, SonyLIV, Voot, and YouTube. The list doesn't include Amazon Prime Video and some Indian streaming platforms such as AltBalaji and Zee5. However, some additional streaming providers are likely to be added at a later stage.

You just need to ask for “good shows to watch” or “what to watch” on Google to get suggestions from all the supported streaming providers. There are also different genres available to choose from. Similarly, Google has provided the option to let you view the list of content available only from one single streaming platform. For instance, you can view what to watch on Netflix or YouTube.

There is also the Edit Providers button on the top-right corner of the results. It lets you choose which TV or movie subscriptions you have. This will allow the search engine to serve you personalised recommendations. You can also look for a specific TV show or movie titles by asking “Bollywood movies in 2019” or “Adventure documentaries about climbing”.

Additional features on mobile app
On the Google mobile app, you can also tap any of the results from the list to get additional details about that particular show or movie. This includes its brief synopsis, genre, and top cast. The pop-up screen also shows the platform that is currently streaming that particular show or movie. Furthermore, there is the Watchlist feature to let you save any of your favourite shows or movies for later.

Similar to what was offered in the US earlier
The overall experience seems similar to what Google brought to the US last year. Nevertheless, the search giant says that it is just the beginning as more “interesting categories and further updates will be added in the coming months.”

Google highlights that it has taken the new move as people are looking for inspiration for new shows or films to watch in this tough time. The company claims that searches for queries including “what to watch” and “best movies” in India have grown significantly since late March. On the other hand, finding new titles to watch is still difficult as we have many choices on board. Google's attempt would, thus, make it easier to find new shows and movies through the unified experience.