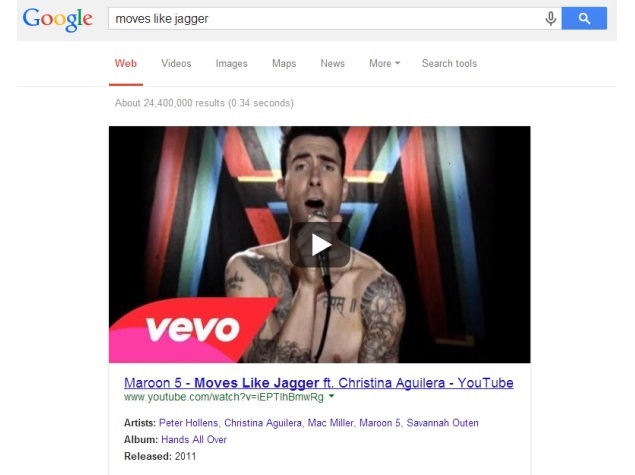 If you are an avid music video buff, then Google's new Search tweak might excite you.

Google has added a new feature to its Search that now shows users searching for a song or album the top music video result more prominently. The new Google Search now displays the music video on top of the regular results, generally from the artist's official YouTube channel; however, sometimes the videos appear from a random YouTube user also, apart from other video sites.

Search Engine Watch in a report details the new tweaks by Google and notes that the search now pops up results for a song or music album with a large image of the music video from YouTube. The search results appear to be a video, with the play button in the search result, but clicking on it actually opens the video on YouTube.

The report claims that Google has cleared that the results are drawn from multiple sources and not just YouTube - "it highlights the first playable video in the search results," the report quotes a Google spokesperson. As SEW's Goodwin points out though, music video search results from YouTube appear with a larger image than from other sources.

The Google spokesperson added: "This was already available in September 2013 when you searched for an artist and then clicked on a song - you'd see a preview of the music video if it was available to display. Yesterday we made it easier to get to - you can now just search for a song directly and see the video screenshot right away."

Notably, we checked the new Google Search tweak and the feature is now rolled out in India also.

Earlier on Thursday, a report revealed that Google Search for Android has been updated and also suggested that a new Google Now Launcher was spotted.

The new update for Google Search has been called a regular bug fix, apart from bringing performance improvements. However, Android Police noted some new features in the new Google Search update. According to the site, the Google Experience Launcher has also received an update and will soon be reportedly dubbed Google Now Launcher. Further, the site claimed that the Google Experience Launcher is installed on the Nexus 5 by default, so the new Google Now Launcher branding will not show up on it.

With the update to Google Experience Launcher, it is being speculated that Google might soon release the Google Now Launcher to other (non-Nexus) Android devices as an app on the Play Store.