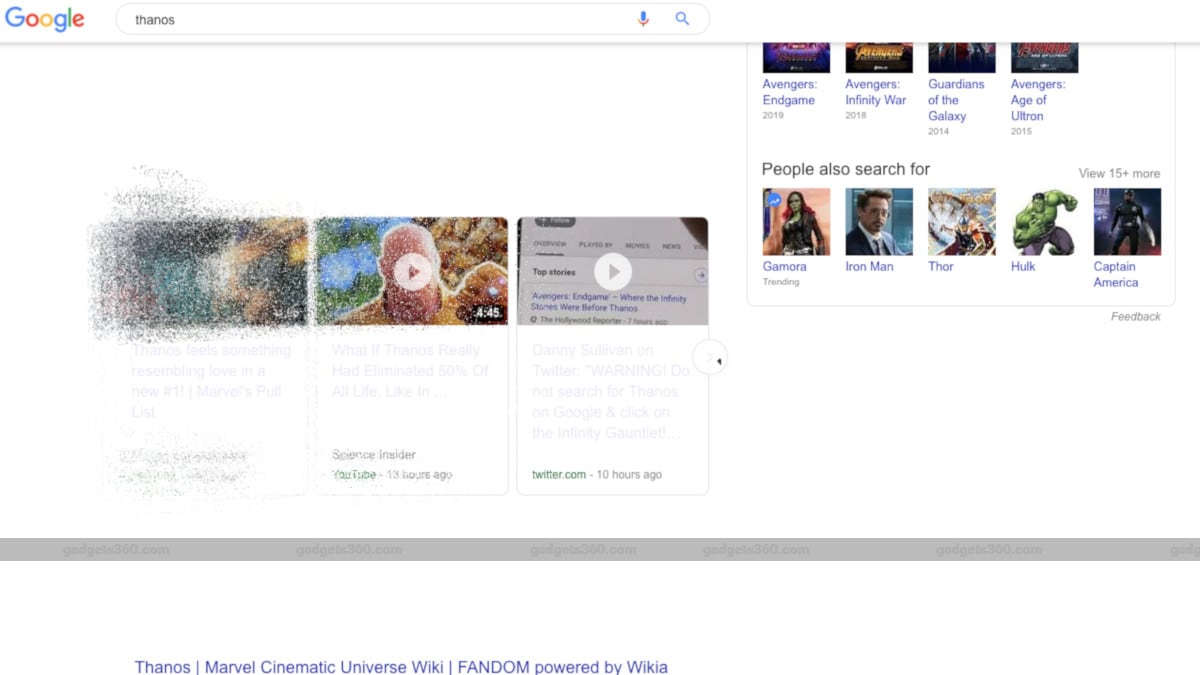 The latest movie in the Marvel Cinematic Universe, Avengers: Endgame is the most looked forward to movie release this summer both in India and abroad. The movie has released in India today, and Google is doing its bit to keep the excitement up. The Internet giant has inserted an interesting Thanos-related Easter egg into its search tool, which channels the events of Avengers: Infinity War and sets the stage for the new movie. The treat is the latest in many by Google, which are usually released around major events.

In order to see the Easter egg, head over to Google.com and search for ‘Thanos'. In the search results, you'll see an illustrated gauntlet on the right side (Knowledge panel) - the glove-like artefact that Thanos uses in Avengers: Infinity War to hold and channel the power of the Infinity Stones. Clicking on the gauntlet activates the Easter egg; you'll first see the fingers of the gauntlet snap, and then see some search results disappear from the list, as if they are being vaporised.

To experience the trick, all you have to do is search for "Thanos" and click on his Infinity gauntlet

Interestingly, you'll also see the number of search results - displayed just below the search bar - reduced by half. This links to the events that take place at the end of Avengers: Infinity War, which set the stage for Avengers: Endgame. Clicking on the gauntlet once more leads to a new animation, of the Time Stone reversing the flow of time, and the restoration of the search results.

Apart from the Thanos easter egg, Google has several other tricks up its sleeve. To try some of these tricks, do a Google search for "Do a barrel roll", "askew", "zerg rush", "recursion" and "anagram".

Avengers: Endgame has been released in India, and has broken records in the country for advance ticket bookings. The movie stars an ensemble cast that includes Josh Brolin as Thanos, Chris Hemsworth as Thor, Chris Evans as Steve Rogers/ Captain America, and Robert Downey Jr. as Tony Stark/ Iron Man.