Google has been seeking to more tightly control what information employees discuss after recent leaks. 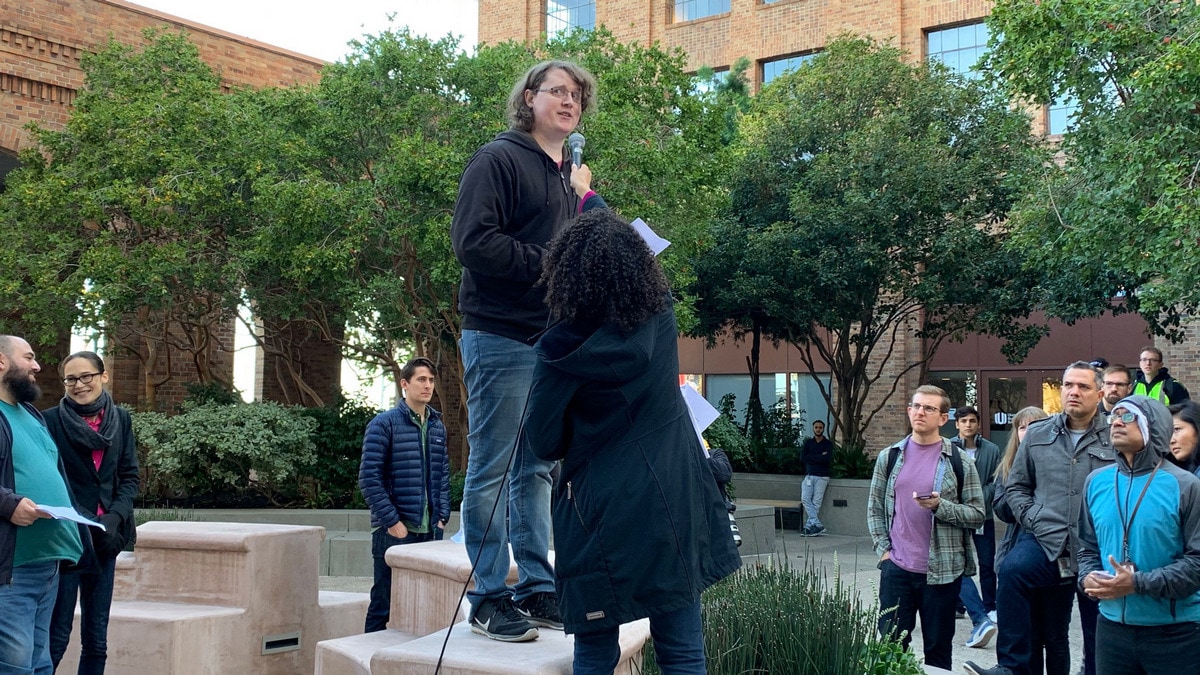 Google announced Monday it had fired four employees for what it said were violations of its policies around accessing and sharing internal documents and calendars, amid rising tensions over what some workers say is a newly concerted effort by management to stifle the tech giant's freewheeling culture. One of those fired was Rebecca Rivers, a software engineer who was at the centre of a rally last week after she was indefinitely suspended. She was put on leave over allegations she had accessed documents not pertinent to her work at the tech giant. About 200 showed up for the rally on Friday outside Google's San Francisco offices to protest the action against Rivers and that of another engineer, Laurence Berland, who is accused of improperly accessing colleagues' internal calendars.

In a memo to all employees Monday, Google's Security and Investigations Team said "none of these individuals were fired for simply looking at documents or calendars during the ordinary course of their work," according to a copy obtained by The Washington Post. Google spokeswoman Katie Hutchison declined to name the employees.

"To the contrary, our thorough investigation found the individuals were involved in systematic searches for other employees' materials and work," according to the memo. "This includes searching for, accessing, and distributing business information outside the scope of their jobs."

Rivers and Berland at the rally Friday denied that they had provided information to the press. Neither could be reached for comment.

Google has been seeking to more tightly control what information employees discuss after recent leaks, including those of sensitive projects, such as work with the Defense Department and attempts to craft products for mainland China, where Google is largely banned. Earlier this month, the company cut its weekly all-hands meetings to monthly and said it would only field questions in them about products, rather than work culture or personnel matters.

Such weekly meetings are common in Silicon Valley, but are also a vestige of a time when many tech firms were smaller and warranted less scrutiny. Google has been buffeted by fines over privacy violations in Europe and ongoing antitrust investigations by the Justice Department and nearly every state attorney general.

Rivers, a worker in Boulder, Colorado, suggested at Friday's rally that she had been targeted for her activism at the company. "Instead of listening to me or thousands of my co-workers, Google has punished me by putting me on administrative leave," she said at the rally. "I believe everyone has a right to know what their work is being used for."

In the memo, Google said some employees "felt scared or unsafe, and requested to work from another location," after learning their calendars were being monitored.

Google's top attorney, Kent Walker, reminded employees this month of the company's policy around reviewing internal documents, which generally only allows materials to be accessed that are clearly pertinent to one's work. The point, workers allege, was to chill discussion among employees, long a hallmark of the company's culture.

Rivers said on Friday she was told she was suspended because she had violated the policy about accessing documents, but a human resources official instead focused on her "involvement in a Customs and Border Protection petition and social media usage outside of work." Rivers and Berland said they were questioned for several hours by internal review teams at Google.

Employees at the rally demanded Google reinstate Rivers and Berland, who also couldn't immediately be reached. They concluded the gathering with a chant: "Bring them back."