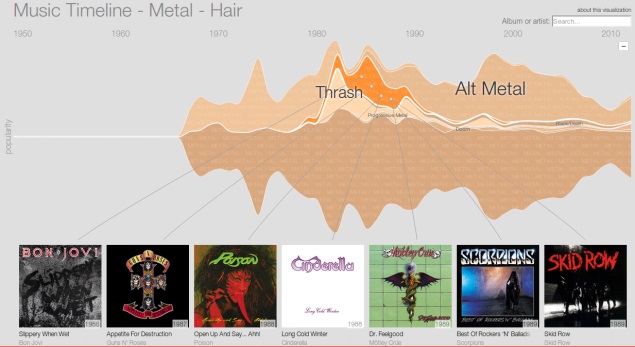 Imagine being able to track the music history of your favourite music genre? Right from the beginning of the jazz and blues scene in the USA to the evolution of heavy metal, its genres and sub-genres from the UK and eventually moving to the USA and to Europe. If times and researchers are to be believed, then there might be something interesting in store for music lovers across the globe.

Search engine giant, Google, has been tracking music downloads and uploads for a while now. But what it is doing, rather unexpectedly of course, is mapping the course of modern music through this. The interactive maps are charted through the Play Music users' libraries. The Google Research blog details the work done on the research as a visualisation (the Music Timeline) to show which music has stood the test of time, and how artists have risen and fallen in popularity.

The Music Timeline uses aggregated data from Google Play Music to show the changes over the last few decades. It shows which albums are still in our playlists over the years. For example, by clicking on metal, users can see the changes from classic metal to alt metal and others, apart from popular artists in each genre. The overall scene of each music genre is showcased. Even changes in vocabulary used to name artistes and their works can be scene. Another interesting aspect that the blog details is the search for an artist to see the trajectory of their works. For example, one can check the chart of U2 as a band from the 80s to the one hit wonder, like Los del Rio's Macarena from 1995.

There are more examples regarding how the visualisation can make complex data accessible to users and even make it fun at the same time. The Big Picture project, which is working on the music mapping, does so on a weekly basis. Google says this is one of the many collaborative efforts between the Music Recommendations and Discovery Teams
Comments