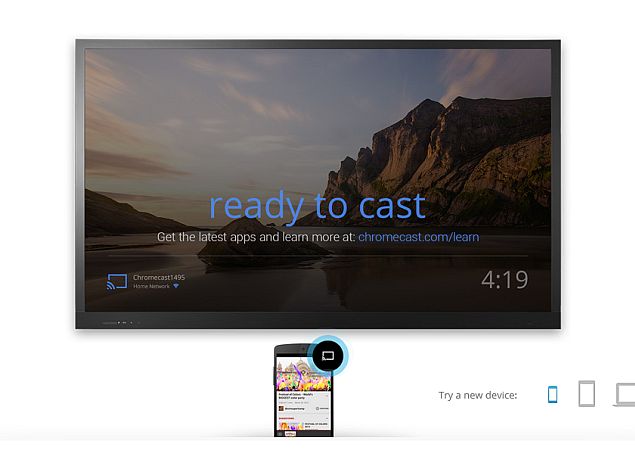 Google at its I/O 2014 Keynote event on Wednesday announced some major updates to its Chromecast dongle, which lets users stream videos and music to television sets. The three major updates for the dongle are Android Mirroring, Backdrop and the ability to stream content from the Android device to the Chromecast-linked television even when on a different Wi-Fi network.

Google has now allowed Chromecast users to 'cast' content without being on the same Wi-Fi connection, and can connect via the Web by searching for nearby devices that are automatically detected.

If the Chromecast device does not identify the user, a PIN can be entered to verify access. "We're using a variety of technologies to confirm that you're in the same room as the Chromecast. If for some reason we can't automatically detect that, you can enter an on-screen PIN," said Rishi Chandra (via Techcrunch), Chromecast Director of Product Management at the Google I/O event.

Chandra went on to introduce 'Backdrop' for Chromecast, a feature enabling users to play slideshows of photos via the user's Android device and Google+ uploads to television sets, apart from curated and themed content in variout categories. "Grandparents everywhere are going to love this feature," joked Chandra while demonstrating the feature at Google I/O 2014.

It is worth noting that the new Backdrop feature, unlike most of the inbuilt slideshow services coming with the TV sets these days, would let users choose which albums and photos to display. Users can also find out what is being shown on Backdrop, by giving the voice command, "What's on my Chromecast?"

Lastly, the Android mirroring feature was unveiled for Chromecast. This feature lets users mirror their Android devices on the television sets. Chandra added that Google has created its own framework for this feature in order to cut down the latency. Android mirroring can also show applications like Google Earth or the smartphone's camera viewfinder.

It was also mentioned at I/O that Google will roll-out these Chromecast updates later this summer. However, no specific dates were given.

It is worth noting that Google launched a support forum for Chromecast users back in February this year. The forum is for those users who are trying to figure out how to make their Chromecast dongles work, or how to pair it with the app.

Google Is Not Subsidising Android One Hardware: Sundar Pichai
Google I/O 2014: Chromebooks to Get Android App Support and More Soon