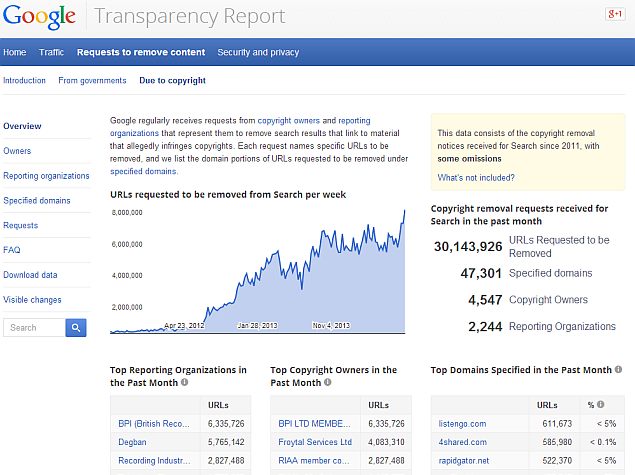 Google, the Internet juggernaut, is now receiving almost 1 million requests each day from copyright owners and reporting organisations to remove Google Search results to URLs that give access to material that allegedly infringes copyrights.

As seen by the above numbers, and in the graph of URL removal requests that Google has plotted since July 2011, the number of copyright-based takedown requests is increasing dramatically over time. Going into details, Torrentfreak calculates that Google is currently receiving one request in every 8 milliseconds, as compared to one request per six days back in 2008 - a rise detailed by the scholarly article 'The State of the Discordant Union: An Empirical Analysis of DMCA Takedown Notices'.

9to5 Google speculates the reason behind the spike in the number of takedown requests is due to the increased usage of Internet via the smartphones and tablets over the years. The Recording Industry Association of America (RIAA) on the other hand states that the dramatic increase in the number of requests shows the inefficacy of the removal process. "Every day produces more results and there is no end in sight. We are using a bucket to deal with an ocean of illegal downloading," said Brad Buckles, RIAA Executive Vice President of Anti-Piracy to TorrentFreak.

Google explains the data available on its transparency report page consists of the copyright removal requests it has received through its web form for Google Search. It notes the data seen is only partial historical record, but that it includes more than 95 percent of the requests the company has received since July 2011. The unlisted removal requests are for products other than Google Search (such as YouTube or Blogger), or requests that are submitted by means other than the web form.

It is worth noting that the first copyright removal request Google has listed on its transparency portal was filed by Warner Bros. Entertainment Inc. on March 10 2011. In February this year, Facebook, Microsoft, Yahoo and Google published details about the number of secret government requests for data they receive, hoping to show limited involvement in controversial U.S. surveillance efforts. Notably, Google said that during the first half of 2013, India sent the second largest number of requests (2,691) for user data from governments and law enforcement requests.