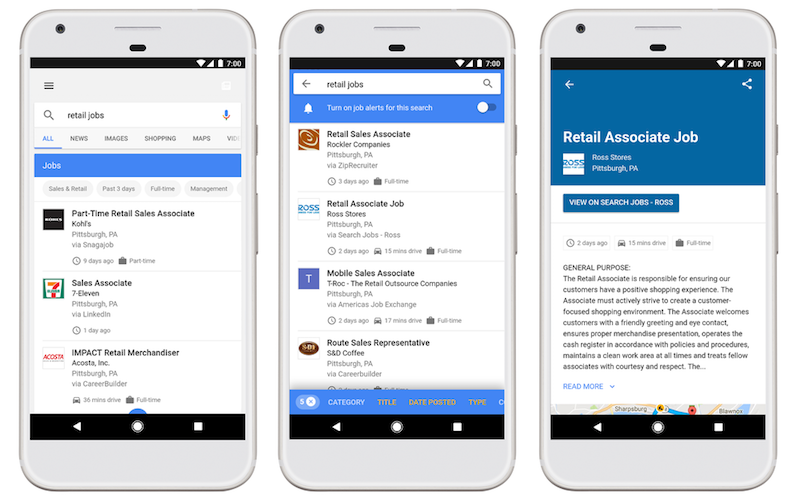 Google is trying to turn its search engine into an employment engine, with a feature called Google for Jobs.

Beginning Tuesday, job hunters will be able to go to Google and see help-wanted listings that its search engine collects across the Internet. The feature is available only in English, on both desktop and mobile. The results will aim to streamline such listings by eliminating duplicate jobs posted on different sites. Google in its announcement post says "People from all walks of life, experiences and backgrounds have undergone a job hunt at some point in their lives. Whether you're a young adult looking for your first job, a veteran hoping to leverage your leadership experience in civilian life, or a parent looking for a job with better pay to support a growing family, we hope this new experience on Google will help make the job search simpler and more effective."

Google will also show employer ratings from current and former workers, as well as typical commute times to job locations. Google for Jobs will further let job seekers filter job openings based on category, date posted, and full-time or part-time employment, and other options.

This detailed jobs information is a departure from the way Google's main search engine has traditionally shown only bare-bones links to various help-wanted sites.

Google is teaming up with a variety of help-wanted and employer-rating services, including LinkedIn, Monster, WayUp, DirectEmployers, CareerBuilder, Glassdoor, and Facebook.

First announced at Google I/O 2017 in May, the Google for Jobs feature will be initially limited to the US market. There's no word as to when the feature will be rolled out to other markets.

Google for Jobs Is Now Live; at Least for Some Users

By the end of May, the Google for Jobs feature had become available for limited users in the US.

Google CEO Sundar Pichai had at the I/O 2017 Keynote revealed the motivation behind the new feature - according to the company, almost half of US employers were having issues filling open positions while job seekers weren't even aware about a job opening.