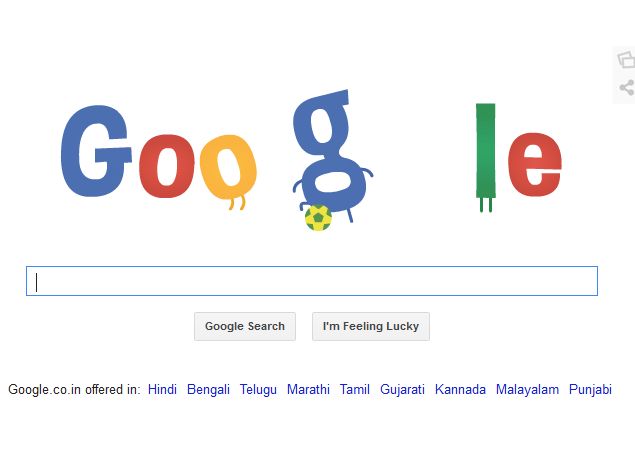 The Google doodles adorning the company's famous homepage are being made outside the United States for the first time as illustrators from California sit in on Brazil's World Cup to provide a fresh take on football, fans and favelas.

Google produces between 300 and 400 doodles each year, up to 50 of them moving or interactive.

Usually the company plans the doodles at least three months in advance and it can take weeks for illustrators to perfect the designs.

This time a handful of the team's 17 members are reacting almost in real time to games, results and events happening in the 12 World Cup venues.

"Interactive can take months but this time we're creating images and animating them in two to six hours," said Ryan Germick, the doodle team leader.

"This has never been done in real time response, there is not really an event so singular where the whole world is watching," he told Reuters in a telephone interview.

"The fact is that this is a singular sport, one game is on at a time and the whole world is fixated on one match and so it is a chance to be part of the dialogue. The part we are celebrating is that the whole world comes together."

Germick is leading a team ensconced in a specially created "Inspiration Room" in Google's Sao Paulo office. Some of the walls are covered with Brazilian memorabilia, there is an old-fashioned juke box playing Brazilian records and TVs are showing the games.

Staff are kept in touch with the interactive world through big screens showing what people are talking about on social media the world over. They also read the papers and swap ideas with google staff in Brazil and elsewhere.

So far they have come up with a new doodle every day. The opening match spawned a doodle with some of Brazil's best-known tourist sights, another featured a tactical tableau and individual games such as the United States v Ghana have also been celebrated.

Even Paul the Octopus, the "psychic" mollusc who won fame by apparently picking winners in South Africa four years ago, was featured trying to choose between rivals.

"We were walking in (Sao Paulo's) Ibirapuera Park and we were talking about Paul and one of us said, I miss Paul, he was funny, and I thought, well we could just bring him back," Germick said.

"Really, it's anything that is a fun take on the World Cup and the cultural ephemera that surrounds it."

Germick is leading a team outing to the Arena Corinthians to see England play Uruguay on Thursday and they are confident they will see more sights and sounds to translate on to the screen.

"I am excited to go to a real game," he said, adding that they've been infected by the enthusiasm of Brazilians.

"The night after the opener we had dinner and we were surrounded by people dancing even though it was a restaurant," he said. "The energy and passion is very powerful."