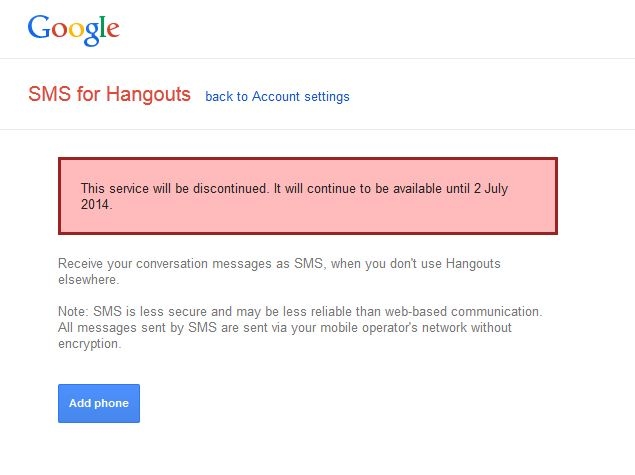 Google on Monday has updated that it is discontinuing SMS for Google Hangouts feature for Web from July 2. Up till now the feature was available for India, Pakistan, Israel, Turkey, Ukraine, Congo and many other countries from Africa and Asia.

The service was introduced by Google for developing countries in May 2013. Users in these countries could add phone numbers to receive text messages to any mobile if they had enabled SMS for Hangouts. The service page now notes that, "This service will be discontinued. It will continue to be available until 2 July 2014." For other regions, the service page reads, "We're sorry, the feature you are looking for is currently only available in a limited number of countries."

Notably, the SMS feature from the Hangouts app for Android will still be available. Users can still send and receive text and multimedia messages in the Hangouts app. Google had included this feature last year in October. The SMS for Hangouts feature allows users to receive Hangouts messages as text messages and lets them reply by the same.

Interestingly, there is a video showcasing the alleged option to "Migrate Google Voice to Hangouts" in Android now doing the rounds of the Internet. The feature menu in the video shows "Not now" and "Turn it on!", suggesting that it will be optional. Also the feature reads, "Receive voicemail and send texts messages in Hangouts." It seems like that the feature is in its 'dogfooding' stage and might roll out to select users for testing.
Comments