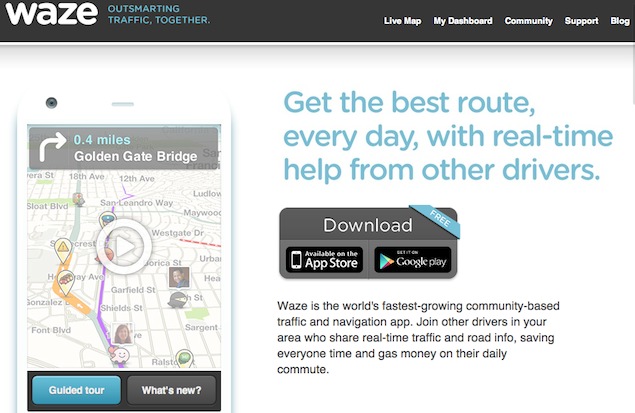 Google Inc bought Israeli mapping startup Waze on Tuesday for just over $1 billion, a source familiar with the matter said, acquiring an online real-time mapping service to safeguard its lead in one of the most crucial aspects of smartphone usage.

Google said in a Tuesday blog post it had closed the long-anticipated deal. It now planned on using Waze's service to enhance its own Maps product, but did not say how much it paid.

Maps and navigation services have become vital for technology companies as consumers adopt smartphones and other mobile devices. Waze uses satellite signals from members' smartphones to generate maps and traffic data, which it then shares with other users, offering real-time traffic info.

Waze's product development team will remain in Israel and operate separately for now, Google said. Eventually, its service will also serve to enhance the U.S. company's Maps app, while the core Waze product itself will benefit from integrating Google-search capabilities.

Google's acquisition ranks among the largest purchases of an Internet company this year as technology deals begin to heat up. Last month, Yahoo Inc closed a $1.1 billion acquisition of blogging service Tumblr.

In a separate blogpost, Waze Chief Executive Noam Bardin said his company decided to forego the typical initial public offering route for startups, because it wanted to focus on the product.

"Choosing the path of an IPO often shifts attention to bankers, lawyers and the happiness of Wall Street," said Bardin, who is based in Palo Alto, California along with a small staff. "We evaluated many options and believe Google is the best partner for Waze."

Offense or defense?
Maps are among the five most-used applications on smartphones and tablets, along with music and games. Analysts say Google might have been motivated by a desire to keep Waze and its real-time traffic information out of rivals' hands.

Facebook Inc was, at one point, an interested buyer, sources have told Reuters. Talks however with the world's largest social network broke down after disagreement over whether Waze's main team should remain in Israel or not, AllThingsD and other tech blogs reported last month.

Four-year-old Waze was the brainchild of Ehud Shabtai, a software engineer with a degree in philosophy and computer science from Tel Aviv University, who hit upon the idea when he realized commercially available GPS software could not reflect real-time conditions speedily enough, or provide certain useful data - such as speed traps.

According to Waze's website, Shabtai teamed up with entrepreneurs Uri Levine and Amir Shinar to found Waze in 2008.

Shares in Google, which pledged on its blog to work with Waze's existing community of update contributors, slipped 0.47 percent to $886.96 in the early afternoon. The tech-heavy Nasdaq was down .36 percent at the time.

"Imagine if you could see real-time traffic updates from friends and fellow travelers ahead of you, calling out 'fender bender...totally stuck in left lane! and showing faster routes that others are taking," Google Geo Vice President Brian McClendon wrote in a blogpost.