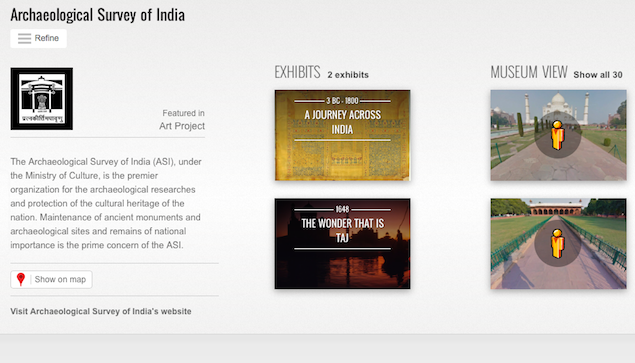 Back in October last year, when Google announced their project wherein, it would use its Street View cameras to capture panoramic images of 100 Indian heritage sites, it was a sign of resurgence for the search giant. Resurgence because, back in 2011, Google Street View had run into trouble with local authorities in Bangalore over capturing images using the Street View car.

However, come 20 February 2014, Google unveiled the first batch of the panoramic images meant for Google Maps, Google Cultural Institute, and Google's World Wonders website, which will now include the likes of the Taj Mahal, the Ajanta and Ellora caves, the Elephanta Caves, amongst others.

The event was held at Safdarjung's Tomb in Delhi, where the Street View Trekker was unveiled by the Union Minister of Culture, Chandresh Kumari Katoch. Present for the occasion was Rajan Anandan, Vice President and Managing Director, Google India and Pravin Srivastava, Director General of the ASI. Under the first part of the project, a total of 30 heritage sites from across the nation have been mapped using the Street View Trekker. The project took off in October last year. It is a part of the Google World's Wonders project and the 360-degree imagery will be available on the sites now.

Speaking more about the entire process, Suren Ruhela, Director, Programme Management Google Maps, says, "The programme saw our team of street view trekkers travel along with the street view camera to heritage sites across the nation. We have completed the sites that are UNESCO heritage centres. The remainder of the sites will be completed over the coming year."

Ruhela also mentions that while it took time for the project to get moving the Ministry of Culture, and the ASI, were enthusiastic about the manner in which it went about completing the first phase. "The project has already been implemented in other countries around the world, and it is there on the Internet for anyone to see. So yes, when we took the proposal to the ASI, they were impressed with it. It took a while to get things started, but since October last year, we have completed 30 of the said 100, which is a good achievement."

The work on the other projects is going on simultaneously, Ruhela informs. Under the panoramic view a person gets a step by step walk around virtual tour of the place. Ruhela informs that, while it is too early to confirm anything, Google is open to partnering with the ASI on further such heritage sites. And given that there are over 3,000 places it should be a good way to showcase the heritage of the nation. Speaking more on it, Union Minister of Culture, Chandresh Kumari Katoch says that the release of the panoramic images, would help create a dynamic and immersive online experience. "It will help the people of Indian and the world understand and engage more in the diverse cultural heritage."

Some of the other places that have been mapped include the likes of Raigad Fort, Nagarjuna Konda Buddhist Stupas, Fatehpur Sikri, Qutub Minar, Humayun's Tomb, Red Fort, Aga Khan Palace, Agra Fort and more. Rajan Anandan, Vice President and Managing Director, Google India also says that it worked with a team that was less than a dozen strong to map the sites. "Working with the ASI was a privilege and we hope that the imagery will help make the culture and heritage of India accessible to the world and the people here."

The Street View Trekker was introduced in 2012, which is a Street View camera platform, with 15 cameras on board that capture a 360-degree view of the area around. It is mounted on a wearable backpack and the total unit weighs around 20 kilograms. The operator walks through pedestrian routes and is designed to reach places that can be accessed by foot. V Prasad, one of the operators who worked on the sites in Maharashtra and Central India, says that the cameras capture images after every two steps taken by the operator. "It eventually helps create a virtual walkaround," he says.

Pravin Srivastava, Director General, ASI, says, "The project will help widen the tourism base for these monuments, and will be a new way where people can view, interact with and learn about, these sites." Ruhela adds that contrary to the fear that it would eat into the tourism industry, it would only increase it. "The truth is after having a virtual tour of a place, people are intrigued to actually visit the place, so everyone will eventually benefit," he adds.

The remaining sites as Ruhela says, should be complete over the year. "While there is no official completion time we hope to complete it by that time." On the issue of future projects of a similar kind, he says that education would be an interesting field to work on. "Right now though it is the Heritage online project, which is our main focus," he says.