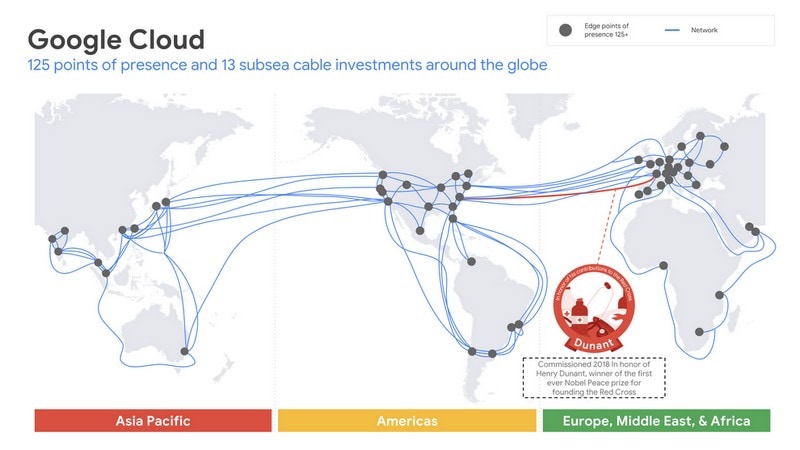 In line with its global Cloud infrastructure expansion plans, Google has revealed its first private trans-Atlantic subsea cable project designed to bring high-bandwidth, low-latency and highly secure Cloud connections between the US and Europe.

Named Dunant, after Henri Dunant, the first Nobel Peace Prize winner and founder of the Red Cross, the cable is expected to become available in late 2020, Google's Strategic Negotiator Jayne Stowell wrote in a blog post on Tuesday.

"This cable crosses the Atlantic Ocean from Virginia Beach in the US to the French Atlantic coast, and will expand our network - already the world's largest - to help us better serve our users and customers," Stowell said.

Google earlier became the first major non-telecom company to build a private intercontinental cable with its investment in the Curie cable.

"Cables are often built to serve a very specific route. When we build privately, we can choose this route based on what will provide the lowest latency for the largest segment of customers," Stowell said while offering the rationale behind the decision to build Dunant privately.

"In this case, we wanted connectivity across the Atlantic that was close to certain data centres, but the reasons could also include the ability to land in certain countries, or to connect two places that were previously underserved, such as was the case with Curie," Stowell added.

Google also took into consideration factors such as capacity and bandwidth for the decision.