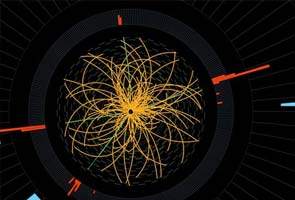 Two cyber security experts, who claimed to have cracked the security code of IT systems involved in the discovery of 'God Particle', Monday conducted training sessions for Indian government officials.

"The projections show there is going to be lot of manufacturing in the India. Lot of software will be involved in it. We are here to create awareness among people on probable vulnerabilities in the cyber system," ethical hacker Chris Russo told PTI.

Argentina-based Russo along with his colleague Fernando Viacanel are both partners of IT security firm E2 Labs. The company in arrangement with industry chamber Assocham has plans to conduct series of technology exchange programmes on cyber security.

Russo said that three times he has been able to find vulnerability in IT system of European Organisation for Nuclear Research (CERN) that has been involved in discovery of 'God Particle' or Higgs Boson.

"Next era of wars is not going to be of bomb, gun and shells. It will be lead by cyber warfare where most attack will be on nation's secret data. The idea to conduct such program evolved after seeing increase in cyber-attack on India," E2 Labs Managing Director Zaki Qureshey said.

He said that E2 labs in arrangement with Assocham will conduct more such technology exchange program by inviting partnering with international cyber security experts.

"There have been reports of website after websites - be it government, political and others - being attacked by hackers. This is part of our efforts to create a partnership between the industry and the government for National Centre for Cyber Security," Senior Director Assocham Ajay Sharma said.

Sharma said talents required to be cyber security experts are mostly available in people with an average age of below 30. This should be also recognised by government, he added. "We have recommended that government should form structure that can accommodate industry to create a National Cyber Security Centre in partnership with industry," Sharma said.