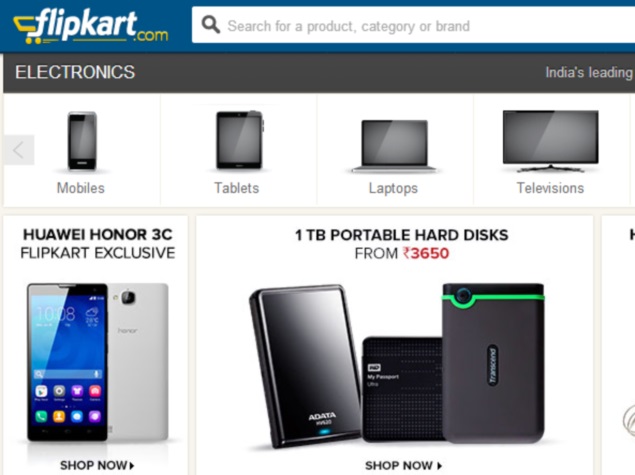 Days after closing the biggest acquisition deal in the Indian e-commerce space, online marketplace giant Flipkart on Monday said it has raised $210 million (roughly Rs. 1,233.4 crores) in a fresh round of funding, bringing the private equity firm DST Global on board as an investor.

"DST is known for its investment in technology-focused firms and they have a great set of companies that they have invested in. This round of funding is more for the association than just raising funds," Flipkart co-founder and CEO Sachin Bansal told reporters on a conference call.

"Led by a visionary like Milner, DST brings a global perspective into each of their Internet investments along with a unique understanding of the businesses they invest in and Flipkart looks forward to working with their team," he added.

On using the funds, Bansal said Flipkart is looking at strengthening its technology and acquiring firms across areas like e-commerce, technology and supply chain.

"We have the cash on books. We will look to strengthen our (tech) platform. We could look at e-commerce, tech firms, supply chain companies. Other adjacent areas like payment can also be tapped," he said, adding that Flipkart could also look at acquiring startups.

Analysts say that the move signifies growing thrust in the Indian e-commerce space towards consolidation with big online firms eyeing small start-ups and firms to expand their presence, reach as well as add specific categories to their portfolio.

While Bansal declined to comment on the total funding raised till date and the shareholding pattern, it is estimated that the firm has raised over $700 million (roughly Rs. 4,110.3 crores) from investors, including the present transaction.

The homegrown e-retailer acquired online fashion retailer Myntra last week in what is estimated to be a Rs. 2,000-crore deal. It had also announced that the company will invest $100 million (around Rs. 587 crores) in its fashion business in the next 12-18 months.

Flipkart's moves are being seen as efforts to protect its turf in the $3 billion (roughly Rs. 17,618.7 crores) Indian e-commerce market that is witnessing aggressive competition from global giant Amazon and peers like Snapdeal.

Led by increasing Internet penetration and youngsters shopping online, India's e-commerce market has seen huge growth in the past few years. As more people log on to the Internet to shop, it is estimated to expand over 7-fold to $22 billion (roughly Rs. 1,29,219 crores) by 2018.

Flipkart had a 4.9 percent market share in 2013, while Amazon and eBay had 1.6 percent and 1.2 percent share respectively.

Asked if the company is in talks to raise more funds, Bansal said Flipkart continues to receive interest from investors.

"We continue to talk to investors if it makes sense. We are not actively looking at raising funds," he said.

Bansal clarified that reports suggesting Flipkart was in discussions with General Atlantic and Fidelity were "rumours".

Flipkart, which started in 2007 as an online bookstore, sells products across categories, including fashion and electronics. It also sells white goods and furniture.

While apparel and electronics are bestsellers for most e-commerce firms, categories such as home decor and household items are also popular.

Sony Still a Walkman in an iPad Age: Analysts
Saavn 3.0 for Android With Revamped UI Now Available for Download