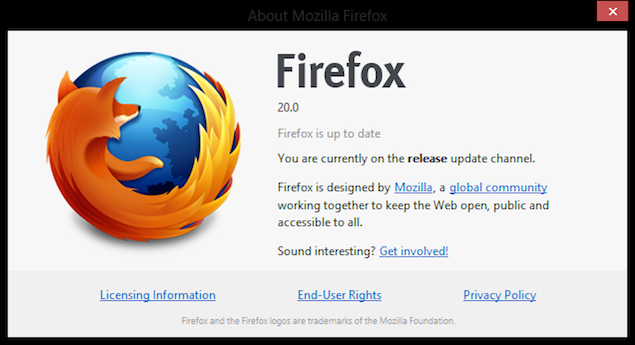 Mozilla Firefox 20, latest version of the popular web browser, is now available for Windows, Mac, Linux, as well as, Android.

The new version offers a better implementation of web browsing in Private mode as it allows users to open a new private browsing window without closing or changing their current browsing session. This essentially means that users can open a separate window for private browsing, while the other windows remain unaffected and continue to record browsing history. The feature has even been extended to the Android version of the browser allowing users to open a private tab. The feature also enables users to check multiple email accounts of one service provider simultaneously.

The new Firefox release also comes with a new download manager in the Firefox toolbar, allowing users to monitor, view and locate downloaded files without the need to switch to another window. The download manager is similar to the one offered by the Safari web browser.

The new release of the browser can be downloaded from Firefox.com.

Change Log for Firefox 20 for Windows, Mac and Linux: