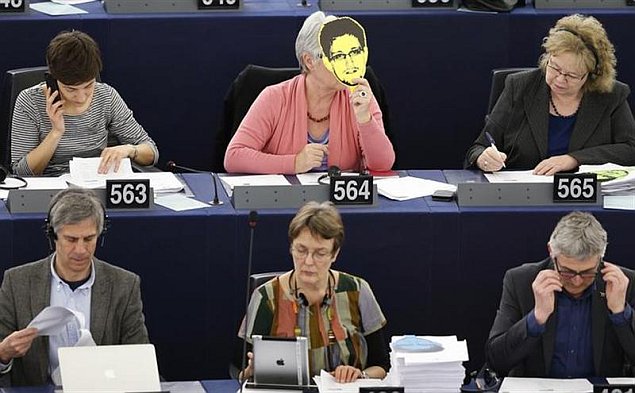 European lawmakers put pressure on EU countries on Wednesday to shield citizens' privacy, warning that they could block a trade deal with the United States if governments did not take a tougher stance on snooping.

Concluding its own investigation into leaks from former U.S. data analyst Edward Snowden over government spying, an overwhelming majority of lawmakers voted in favour of a resolution warning that the world's biggest trade deal "could be endangered" unless EU countries stopped such surveillance.

While the snooping vote was only a symbolic warning shot, both the European Parliament and U.S. Congress must sign off the U.S.-EU free trade deal for it to become law, meaning their threats carry some weight.

"It's not enough to point the finger at the United States. European states were also involved," Jan Philipp Albrecht, a German lawmaker, told Reuters, referring to the alleged involvement of British and other intelligence services in surveillance.

"The member states must put into place laws that place limits on the surveillance by intelligence agencies. We need rules on how they exchange information."

Tension over the issue has been building after parliamentarians criticised European leaders for what they said was a limp response to allegations of U.S. spying.

Late last year, the European Union backed down on threats to suspend agreements granting the United States access to European data following leaks that Washington had spied on European citizens and EU institutions.

The tough stance of the parliament is unlikely to soften ahead of European elections in May, a vote set to bolster the number of lawmakers with a more populist political agenda.

The parliament also voted to back new privacy rules, another symbolic move, this time to renew pressure on EU governments to finalise the first revision to Europe's data laws since 1995.

This regulation will establish a single law for data protection across the 28 countries in the European Union, replacing the current patchwork of national rules. It may still, however, be changed by countries before entering law.

In its legislative proposal unveiled in early 2012, the European Commission suggested sanctions of up to 2 percent of global turnover on companies that break data protection rules, and said consumers should have the "right to be forgotten" - erasing their digital traces from the Internet.

The parliament wants to increase the fine to 5 percent of annual worldwide turnover.

Parliament, in line with the Commission's proposals, also wants to impose strict rules on how data is shared or transferred to countries outside the European Union.

For example, if the United States wants access to information held by Google or Yahoo! about a European citizen in Europe, the firm would have to seek authorisation from a European data authority first.

Facebook, Google and other Internet-based firms, the vast majority of them American, have lobbied against the Commission's proposal, concerned it will lumber them with extra costs.

"Following the U.S. data spying scandals, data protection is more than ever a competitive advantage. Today's vote is the strongest signal that it is time to deliver."