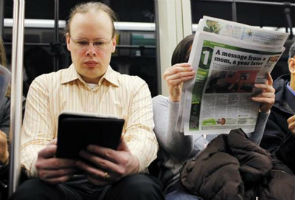 The mood at this week's giant Book Expo America was upbeat as publishers' excitement over the growth of electronic books - or ebooks - and the future of digital publishing offset concern over sluggish sales of traditional books.

Book publishing is undergoing a sea change that parallels the transformation of music publishing over the past decade, and book sellers are starting to feel their way forward.

Reflecting that change at the annual three-day gathering of writers, booksellers and publishing house executives, ebook publishers and technology companies were given more prominent space in the heart of the showroom.

But the future of the industry was the focus, and the general feeling was that writers and publishers are coming to a better understanding of electronic publishing and marketing.

"This year it felt like there was high energy," said Todd Humphrey of Canadian digital book company Kobo, one of the ebook companies that was moved from the Expo's corner, where most of them were previously placed, to the middle of the floor next to major publishers like Random House.

"Last year, the publishing industry as a whole felt like it was a bit on its heels. This year there were a lot more smiles," he added. "People are realizing, things are moving to digital, people need to adjust."

Things are not all sweetness and light on the ebook publishing front, though.
Copyright Thomson Reuters 2012