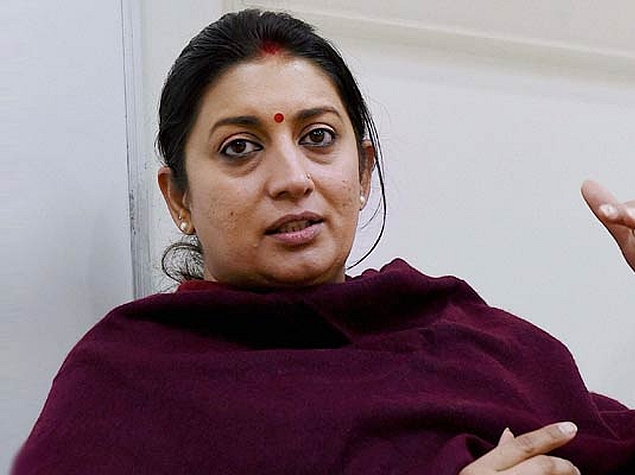 Union HRD Minister Smriti Irani on Saturday said the setting up of a national electronic-library and project 'Swayam' were among the many steps being taken by the government to achieve the target of zero illiteracy in the country.

"India is making significant changes in the next six months. The first mega project is the national e-library wherein the IITs (Indian Institute of Technology), IIMs (Indian Institute of Management), NCERT (National Council for Educational Research and Training) and also the National Archives will be pooled in," the human resource development minister said in the 90-minute programme 'Talkathon', organised by the information and broadcasting ministry.

"On one platform, maximum education resources will be provided. Even the Saarc (South Asian Association for Regional Cooperation) nations have asked us to extend these resources to them and we are doing it," she said.

Irani said that providing quality higher education was a challenge and therefore the government was on the verge of starting the "Study Webs of Active-Learning for Young Aspiring Minds" (Swayam) online portal that will bring together IIT, IIM, CBSE, NIOS, and other institutes to provide free, quality education to classes 9 to 12.

"Education will be provided free and exams can be given at any of the 500 earmarked centres that will come up all over the country. Degrees and diplomas will be given if you pass the exam," Irani said.

Under its initiative to highlight the achievements of the government in the past one year, union ministers Irani, Piyush Goyal and Nirmala Sitharaman interacted with netizens through Twitter using "#AskYourGovt @MIB_India" and the answers were streamed live on the information and broadcasting ministry's YouTube channel.

Graphene May Be Used to Build Fuel-Free Spacecraft: Researchers
Study Finds Why We Browse Facebook When We Feel Like Taking a Break