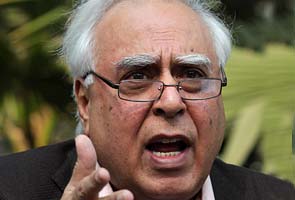 Highlights
Amid a furious debate on Twitter and several international reports, Telecom Minister Kapil Sibal today acknowledged that he has asked internet firms like Google and Facebook to  ensure user content is screened before offensive material is posted online.  The companies have said this is not possible.

Mr Sibal denied that this amounts to censorship; he also said that the government will have to intervene because the companies have not cooperated.

"I suggested that these platforms should evolve a mechanism on their own to ensure that such contents are removed as soon as they get to know of it... I have told them that this cannot go on," he said at a press conference in Delhi. (Your say: Facebook vs Govt)

Explaining the government's position, he said,  that some of the content he finds objectionable could hurt religious sentiments; other material he showed to reporters before his press conference as examples of obscene and defamatory content included doctored images of Sonia Gandhi and the Prime Minister.  "I believe that no reasonable person, aware of the sensibilities of a large section of the communities in this country, would wish to see this in the public domain," the minister said.

Mr Sibal said he had lodged his first complaints about these images  three months ago.  "My aim is that insulting material never gets uploaded,"  Mr Sibal said.  "We will evolve guidelines and mechanisms to deal with the issue....they will have to give us the data, where these images are being uploaded and who is doing it."


Mr Sibal said that he has held three meetings in the last few months with representatives of Facebook, Google, Microsoft and Yahoo to request them to screen derogatory material from their sites.

At their most recent meeting yesterday, Mr Sibal said, the executives  told him they would not be able to set up a  voluntary framework to keep offensive material off the Internet.

"We are seeking their cooperation, and if somebody is not willing to cooperate on incendiary material like this, it is the duty of government to think of steps that we need to take," he said. "We don't want to interfere in freedom of the press, but this kind of material should not be allowed," the minister said.

Mr Sibal said the Internet companies had told him that they were applying U.S. standards to their sites, and he objected, saying that they needed to be sensitive to Indian sensibilities.

"We want Facebook to be a place where people can discuss things freely, while respecting the rights and feelings of others, which is why we have already have policies and on-site features in place that enable people to report abusive content. We will remove any content that violates our terms, which are designed to keep material that is hateful, threatening, incites violence or contains nudity off the service. We recognise the government's interest in minimising the amount of abusive content that is available online and will continue to engage with the Indian authorities as they debate this important issue." (Read: Facebook's rules for what it allows online)

Meanwhile, in a statement, Google's spokesperson said, "We work really hard to make sure that people have as much access to information as possible, while also following the law.  This means that when content is illegal, we abide by local law and take it down. And even where content is legal, but violates our own terms and conditions, we take that down too, once we've been notified.  But when content is legal and doesn't violate our policies, we won't remove it just because it's controversial, as we believe that people's differing views, so long as they're legal, should be respected and protected ."