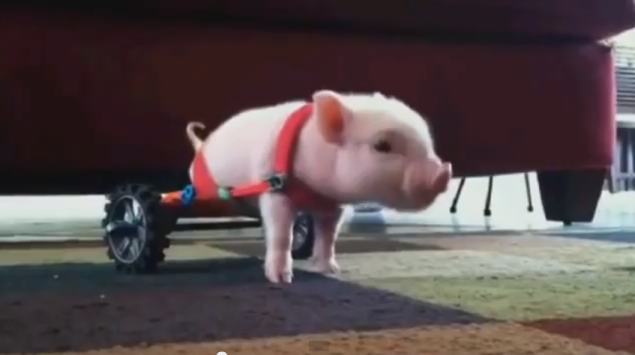 Prospects for a disabled farm animal born without the use of its hind legs are normally grim.

That is not the case for Chris P. Bacon, a month-old piglet from Florida whose videotaped struggle to learn how to use a tiny wheelchair have turned him an Internet sensation.

"He's cute. He grunts. And he's got a pretty cute little wheelchair," said veterinarian Len Lucero, trying to explain why his YouTube video of Chris's exploits have logged more than 474,000 views in two weeks.

After a client who could not care for Chris dropped him off at Lucero's veterinary hospital in Clermont, Florida, 30 miles west of Orlando, Lucero grabbed pieces from a child's set of K'nex construction toys to build a tiny wheelchair to mobilize the rear-end of the pink-and-white piglet.

The six-minute video shows Chris, then one pound and 10 days old, struggling with the contraption on Lucero's living room rug.

Chris walks on his front legs while lifting and holding the wheelchair off the ground. He grunts and roots around in the rug for food. He drinks lamb formula out of a baby bottle and wears a wet milk mustache.

Two other YouTube videos of Chris playing with a stuffed yellow duck and waking up in an incubator attracted another 160,000 views.

"You are the cutest piggy ever, you pink oinker!" wrote one of the thousands of fans.

Lucero said Chris was born on January 13 with the congenital defect.

His owner thought the only option was to have Chris put down, but Lucero realized Chris could live a full life with proper care. He offered to bring Chris to live on his own farm along with the family's goats, horses, dogs and cats.

"He was healthy and I was afraid he would have eventually met his maker," Lucero said.

Lucero said he does not know how big Chris might become, or anything about his parentage. Chris has outgrown his second wheelchair and will soon grow into his new, more permanent and rugged model.

Owning a celebrity pig that is set this week to make his national TV debut on a daytime talk show has changed his life, Lucero said.

"He just makes me happy," said Lucero, adding that he is getting "3 or 4 hours of sleep a night, if that, because I'm trying to keep up with all his media."

He has drawn up plans for "I Love Chris P. Bacon" T-shirts and possible advertisements on his YouTube videos.

Lucero said he does not expect to make much money off Chris' celebrity and that Chris' true value to him lies elsewhere.

"I want my piggy to be famous," Lucero said. "My goal is to put him out there because he makes people happy."