Using AI, you can add facial expressions to old photos of relatives or famous people 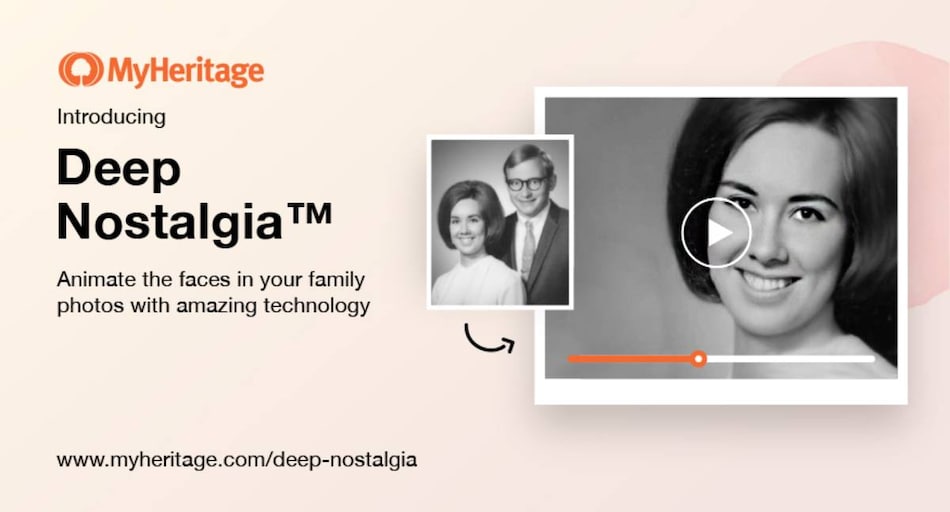 Deep Nostalgia is a new AI-powered technique from online family tree service MyHeritage, which adds facial animations such as smiles, nods, blinks, and head tilts to still portrait photos. Using the website or mobile app, users can choose from a set of pre-recorded animations that can be transferred onto their own still photos. The service warns that its technology should not be used to try creating "deepfake" videos of public figures or anyone else without their permission. You can crop faces from group shots but cannot yet animate multiple people in one frame. A watermark will be applied to indicate that such animations are generated artificially.

Users can sign up for a free account to use Deep Nostalgia, but will be limited to a small number of animations unless they purchase a subscription plan. Animations can easily be posted to social media and exported as MP4 files. The technology has gone viral on social media, with people posting examples of "Harry Potter"-style animated portraits. In India, Keerthik Sasidharan, author of The Dharma Forest, is among the users who have posted animations of Indian freedom fighters and other historical figures. Here are some of the most interesting photos they have posted.

Kind of surreal to take a photo of the singularly inspiring Bhagat Singh -- a revolutionary voice in 1920s India, who was hung by the British in 1931, at the age of 24 -- run it through the Heritage AI algorithm, and see him reanimated. pic.twitter.com/CfC0Gu6Gxk

Swami Vivekananda probably would have laughed at such algorithmic efforts to reanimate photos, but as a great believer in the powers of science to improve material aspects of human lives, he would have probably wanted to understand the details of how it all works. pic.twitter.com/3zFu9suGar

It was hard to find a quality photo of Lokmanya Tilak, but this worked. Tilak urgently deserve a new reappraisal as one of the founding fathers of the modern Indian mind. A reformist & revivalist of traditions, a believer in the power of mass media before most Indians could read. pic.twitter.com/M93KWkR6bc

Munshi Premchand, half bemused, at the newfangled inventions that have come up 80 years after his death. If he were alive, he would probably have used some of it--perhaps, even a novel about of a farmer who wants to buy a computer for his daughter--in his vast oeuvre of writings. pic.twitter.com/dNtm4Dh7CB

S Ramanujan. Seems like he is trying to make sense of some equations on a blackboard. pic.twitter.com/grxawuI3Ag