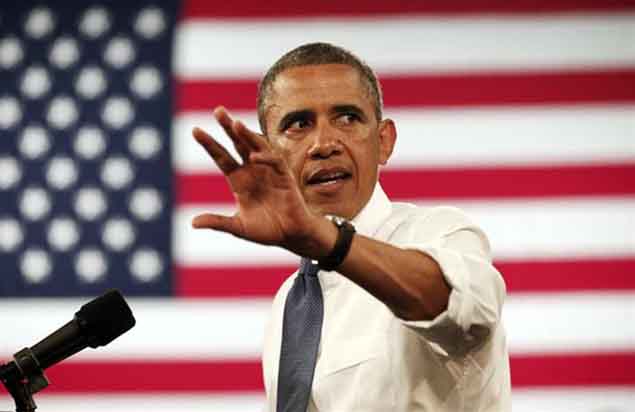 President Barack Obama will complain to Chinese President Xi Jinping at a summit on Friday about alleged Chinese hacking of U.S. secrets, even as the White House faces growing questions at home over American government surveillance.

Meeting at the luxurious Sunnylands estate near Palm Springs in California, Obama will seek Xi's assurance that he takes seriously accusations of growing Chinese cyber spying, including snooping on advanced U.S. weapons designs.

"All nations need to abide by international norms and affirm clear rules of the road," a U.S. official told reporters in previewing the summit. "That's the backdrop to the discussions that the two presidents will have."

Dispute over cyber-security could test the two men's ability to get along when they meet in the Californian desert in talks that are billed as an informal get-to-know-you encounter.

Obama intends to tell Xi that Washington considers Beijing responsible for any cyber attacks originating from its territory and that it must take action, U.S. officials said.

But in his first meeting with Obama since taking over China's presidency in March, Xi may not be in a conciliatory mood.

He is expected to voice discomfort over Washington's strategic "pivot" toward Asia, a military rebalancing of U.S. forces toward the Pacific that Beijing sees as an effort to hamper its economic and political expansion.

And Obama's protests about Chinese cyber spying might be blunted by news that the U.S. government has been quietly collecting the telephone records of millions of Americans as part of U.S. counterterrorism efforts.

As Obama was flying to California ahead of the summit, more questions were raised about the extent of U.S. government domestic spying when the Washington Post reported that the National Security Agency and the FBI are also tapping into the central servers of leading U.S. Internet companies to examine emails and photos. But major tech companies said they do not provide any government agency with "direct access" to their servers.

Pushing back against years of U.S. allegations of Chinese hacking, Beijing insists it is more a victim than a perpetrator of cyber espionage. China's top Internet security official said this week that he has "mountains of data" pointing to U.S. hacking aimed at China.

But the US Congress is losing patience, after a report that Chinese hackers had gained access to design plans for US weapons systems like the F-35 Joint Strike Fighter. China denied that, saying it needed no outside help for its military development.

Just a day before Xi's visit, three US lawmakers proposed a new law that would punish hackers backed by China, Russia or other foreign governments by freezing their U.S. assets and revoking visas for them and their families.

The two leaders may try to deflect pressure at the summit for immediate progress on cyber disputes by promising more in-depth deliberations by a U.S.-China "working group" already set to convene in July for the first time.

'Big power' relationship
High-level U.S.-Chinese encounters of recent decades have been unable to match President Richard Nixon's groundbreaking visit to Communist China in 1972 that ended decades of estrangement between Washington and Beijing.

The optics of the summit are crucial for Xi who wants to be seen as an equal as he pushes for a new "big power" relationship that takes into account China's status.

Obama talked about the upcoming meeting at a Democratic fundraiser on Thursday evening.

"The transformation that is taking place in China is extraordinary and never in the history of humanity have we seen so many people move out of poverty so rapidly in part because of what is happening in China and what's happening in India," he said. "And yet when you look at the challenges they face and the challenges we face I'll take our challenges any day of the week."

Obama aides have played down the chances of any big breakthroughs in more than five hours of talks over two days in Sunnylands, a 200-acre desert estate that has hosted presidents such asRonald Reagan and Bill Clinton.

A willingness to forgo the traditional pomp of a White House visit appears to signal a fresh approach by Xi, who as president-in-waiting met Obama in Washington in February of last year. He is aCommunist Party "princeling," the son of a revolutionary leader. But he is also fond of Hollywood movie war dramas.

"He seems to be someone who is fast on his feet, who is open to engagement," another Obama aide said, drawing a contrast to Xi's more button-down predecessors.

Even with scenic surroundings, the meetings - which begin in late afternoon on Friday - are expected to be anything but laid-back.

The leaders face the task of trying to narrow longstanding differences on issues such as North Korea, China's territorial disputes with US allies in Asian waters, trade problems and China's human rights record.

The California meeting is an opportunity for Obama to score a foreign policy success at a time when the lack of US action on Syria weighs heavily on his record.

The two presidents had not been due to meet until September at a Group of 20 summit in Russia. But US officials, surprised at how fast Xi asserted authority after China's once-in-a-generation leadership transition, decided to bring the two together sooner.

"The idea is to lay out an agenda and a path early before old habits are set," said Jeffrey Bader, an Asia expert at the Brookings Institution who served as Obama's top China adviser for part of his first term.

Obama will be looking to build on growing Chinese impatience with North Korea over its nuclear and missile programs, a shift that could bring Beijing - the closest thing Pyongyang has to an ally - closer to Washington's position.

Obama is likely to ask Xi to brief him on a visit to China last month by an envoy of North Korea's young leader, Kim Jong-un. Beijing's message to Pyongyang was to halt its internationally banned tests, although the North showed little sign of heeding the request, according to a source with knowledge of the talks.

Shedding jacket and tie, Xi, 59, will have the kind of face time with his 51-year-old U.S. counterpart that few foreign leaders have been afforded.

The White House may have missed an opportunity for even deeper relationship-building. Xi's glamorous wife, Peng Liyuan, a famous singer who has broken the mould of Chinese first ladies who have traditionally kept out of the limelight, is accompanying her husband on his U.S. visit.

But popular U.S. first lady Michelle Obama will remain in Washington, where their two daughters are finishing the school year. Though her absence likely will not go unnoticed by the Chinese public,Foreign Ministry spokesman Hong Lei made clear his government was unfazed, saying: We respect the relevant arrangements by the U.S. side."