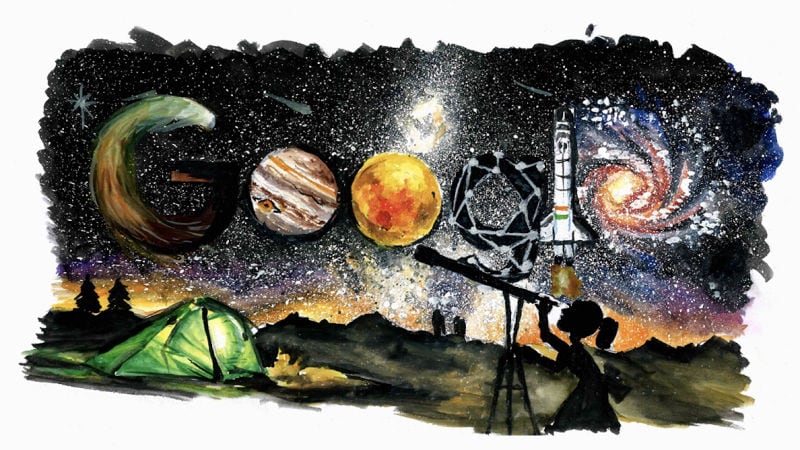 Children's Day in India is being celebrated with a Google doodle drawn by a student, continuing what has become a tradition for Google. Pingla Rahul More, a student from Mumbai, won the Doodle 4 Google 2018 competition with her doodle that's being featured on the Google India home page on the occasion of Children's Day on Wednesday. The doodle shows a child looking at a sky dotted with stars with a telescope, inspiring children to explore space.

India celebrates Children's Day November 14 as a tribute to the country's first Prime Minister Jawaharlal Nehru, who was born on the day in 1889. Nehru, fondly called "Chacha Nehru", was a favourite among kids. His books on Indian history and world history written to aid his daughter Indira Gandhi is read by children in schools and also have been adopted into TV series. India started celebrating Children's Day from 1959, when it used to be on November 20, which the UN designated as the universal Children's Day.

Following Nehru's death in 1964, it was unanimously decided to celebrate his birthday as Bal Diwas in the country due to his love and affection towards children.

Every year, Google invites students from class 1 to 10 in India to exhibit their ideas in a creative doodle, and the winning entry is featured on the Google India home page on Children's Day. The theme for this year's contest was "What inspires me?"

Pingla Rahul More created galaxies, planets and spacecraft to represent the vastness of things in space - carefully arranged to form letters in the Google logo for the Children's Day doodle - showing her own fascination with space exploration. More's entry received 300,000 votes from people.

There were four more group winners that Google chose: a doodle on farmers, animals, wise monkeys, and a study desk.

Earlier this year, Google announced that the national winner of "Doodle for Google" would get a Rs 5 lakh college scholarship, a Rs 2 lakh technology package for their school, as well as a trip to the Google office in India, among other prizes.

The online voting for the top contestants began late in October and continued till November 6.

The first edition of Doodle 4 Google India was held in 2009 and the theme was "My India".