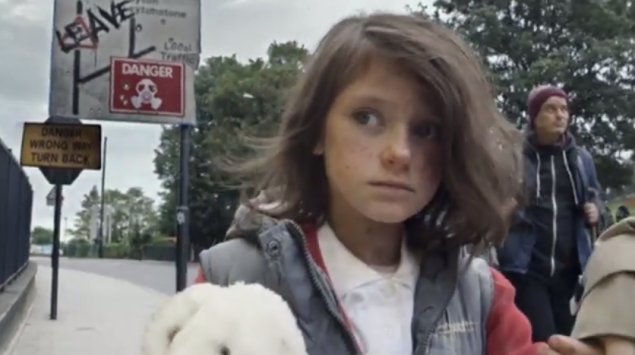 A charity's video transposing the effects of the Syrian civil war onto an ordinary girl growing up in London has gone viral on the Internet.

Save the Children UK's 94-second clip, released on Wednesday, had racked up around 14 million hits on the YouTube video-sharing website by Saturday.

The clip invites viewers to imagine "if Britain were Syria".

Starting with the smiling girl blowing out nine candles on a birthday cake, it shows one-second glimpses of her life, which slowly changes from playing with toys and learning the recorder as war takes hold.

Brief snippets of news clips are heard in the background, as the electricity cuts out, a blast goes off, the family rushes into a car and gunfire is heard.

The girl is shown dirty-faced, crying, cowering in fear, going through a makeshift checkpoint and with soldiers.

At the end, she is seen, cleaned up, in a medical facility, with a tear rolling down her cheek as she marks her next birthday with a solitary candle on a metal plate.

"Just because it isn't happening here doesn't mean it's not happening," Save the Children's website says.

"Help us make sure the plight of Syria's children is not forgotten."

The charity said they wanted to bring the Syria conflict's effects to people's doorsteps.

The organisation said they hoped the rapid spread of the clip on social media would encourage people to do more to ensure life-saving aid reached children suffering in the three-year-old conflict.

"The video is shocking, and its fast and unique storytelling narrative gave people something to talk about and share. That's really what we wanted to do most of all: start a conversation," a spokeswoman told AFP.

"The video aims to reach the British and international public to help them to better understand the Syrian crisis and imagine how it might feel for a civil war to break out in their home town, shattering their life, health and security.

"We want to put a fresh light on the conflict, and to reach people that may not fully understand what is happening and give them a new perspective on the reality of the lives of millions of Syrian children and their families affected by the fighting."

United Nations Secretary General Ban Ki-moon highlighted the plight of children in war-torn Syria on Friday, saying more than two million were not getting an education due to the conflict.

About 40 percent of schools have been damaged or used as shelter by people fleeing their homes, he added.