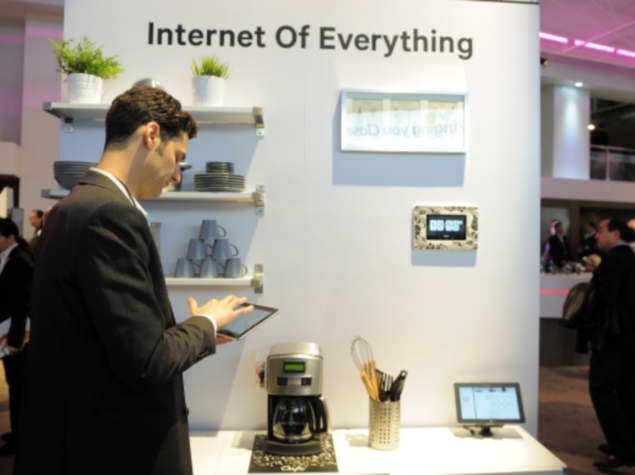 From drones and smart cars to remote-controlled door locks and eyewear, the 2014 Consumer Electronics Show promises to showcase the "Internet of Things," along with gadgets like smartphones and tablets.

The technology extravaganza that plays out each year in the glitz-laden city of Las Vegas has evolved beyond the eye-popping television technology for which it is known, to serve as a stage for once-dumb devices given brains in the form of computer chips and Internet connections.

And smartphone and tablets have become such stars in their own rights, complete with rapid release cycles and exclusive launch events, that the titans in that market tend to leave the CES stage and hordes of press from around the world to gizmos that don't usually get a spotlight.

"You will see a lot about the Internet of things; all the gadgets that are not a tablet, smartphone or personal computer but are attached to the Internet," Forrester analyst Frank Gillett said of CES, which officially kicks off on Tuesday.

"Like your car telling you that you are speeding too much or door locks that you unlock with a smartphone," he continued. "There are all kinds of gadgety things like that we will see."

CES organizers are also billing the four-day show as the largest "app event" in the world, complete with hackathons and a mobile applications "showdown."

"Apps have become an integral part of our everyday lives, from use in phones, computers, tablets and wearable technology," said Gary Shapiro, president of the Consumer Electronics Association (CEA) which organizes the show.

"The app innovation at CES offers the opportunity for networking, showcasing technology and hackathons focused on this growing tech space."

The show will feature more than 3,200 exhibitors with products spanning 15 different categories, according to organizers. There will be an array of zones with themes such as seniors, children, health, robotics, and wearable tech.

"We used to turn out to play with the toys, now with the software and services being what people are looking for the toys just aren't as cool any more."

Long a hardware showcase, CES is under pressure to adapt to consumers loving digital content and services ecosystems such as the iTunes library tailored for Apple iPhones, iPads, and iPod touch devices, according to Milanesi.

"So, you need the health, connected home and other zones to show end-to-end value being delivered through the hardware," she said.

Apple has made a practice of skipping CES, opting instead to launch products at private events deemed must-attend media affairs. Other major players, such as Samsung and Google, in the smartphone and tablet market have followed suit and host product unveilings of their own instead of competing for attention in the CES frenzy.

"Last year, CES exhibits went from an Internet fork to connected cars," Milanesi said. "There is so much, it is easy to get lost in the noise."

Analysts did expect arrays of smartphones or tablets powered by Google's freshly-released KitKat version of the Android mobile operating software.

And, while Microsoft no longer formally exhibits at CES, there should be an abundance of hybrid tablet-laptop computers built with the latest Windows software from the US technology titan, according to Gillett.

"You will see a big push from Microsoft and Intel on two-in-ones, tablets with removable cordless keyboards that let you use a tablet as a PC."

The latest and greatest in television ultra-high definition screens are expected to be on display, but analysts expected them to land in the market with a thud similar to that made by 3-D televisions.

"You television gets a zillion more pixels, but most people won't be able to notice the difference," Gillett quipped.

Automotive offerings will include Toyota unveiling a new hydrogen fuel-cell concept car set for exclusive release in California in the year 2015.

"It is a legitimate and logical launching pad for advanced technology in the automobile business," said John Hanson of Toyota Motor Sales USA.

Meanwhile, a company called Cellcontrol will be showing off a gadget that plugs in under car dashboards and blocks drivers from using smartphones while vehicles are in motion.

CES will include sessions devoted to industry trends and regulations.

Among those slated to take to the CES stage are the chiefs of Sony, Yahoo, Twitter, Intel, and Cisco.

"Given the reality of our lives, the Internet-of-things has become a central theme."

CES organizers expected attendance to be on par with the 152,000 people who showed up last year.