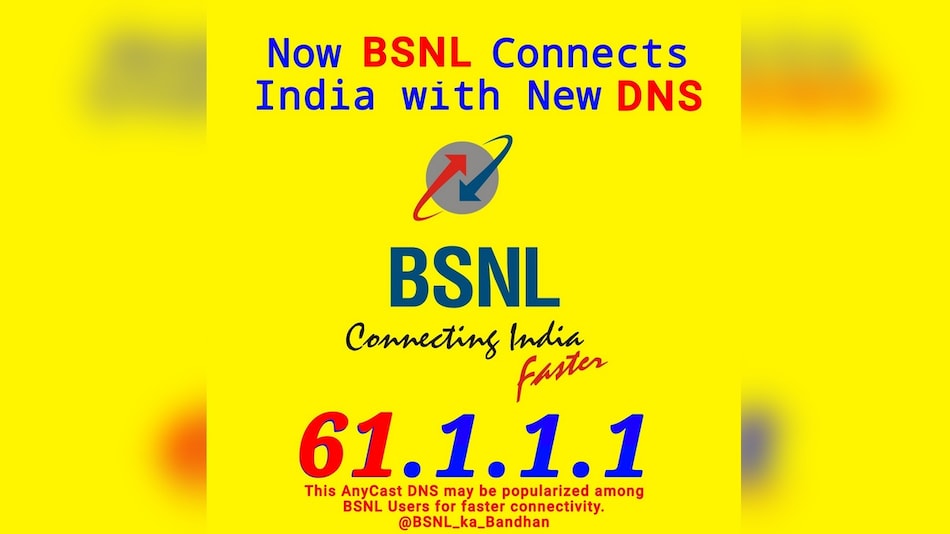 BSNL has implemented a AnyCast Domain Name System (DNS) for broadband and Fiber-to-the-Home users that should improve the speed of Internet connections. The AnyCast DNS 61.1.1.1 implementation was shared by several BSNL executives on Twitter. This new DNS comes with direct caching and peering services with major websites allowing them to be loaded faster. As per a new report, the company has also implemented alternate DNS 61.0.1.1, 61.0.3.3, and 61.0.2.2 as well.

AnyCast DNS 61.1.1.1 works with major sites including YouTube, Facebook, Google, and others, as per the tweet by a BSNL executive. With its direct caching and peering services, customers who use BSNL broadband and Fiber-to-the-home will theoretically be able to browse these sites relatively faster. This development was not only shared by another company executive, but also through a post by the BSNL India Twitter handle where it recommended the DNS server address 61.1.1.1.

What is DNS and AnyCast DNS?

DNS or Domain Name System is what translates the domain name to an IP address so that browsers can load whatever website you want to access. This is done because we use website names like Google.com, but the browser requires an IP address for this name, so, DNS is responsible for translating this name into an IP address. Traditionally, this is done on a 1:1 basis, called Unicast, where every node on a network has a unique IP address. This can cause slower access to highly popular sites, such as Google or Facebook.

According to Cloudflare, one of the biggest Internet infrastructure companies in the world, AnyCast uses different techniques to distribute data on a network. Rather than having to connect to a specific server for your data, your request will get routed to wherever the information is nearest to you, reducing the latency or amount of time taken for the data to move between the server and your computer.

AnyCast DNS allows for any one out of a number of DNS servers to communicate with the client or user. Because the query can be sent out to multiple DNS servers and any one of them, usually the closest one, can respond, the time taken to fetch an IP address reduces. This means when you try to open a website, the IP address translation happens quicker and the website loads faster.