The suits allow marines to fly above the seas just like the Marvel Comics character. 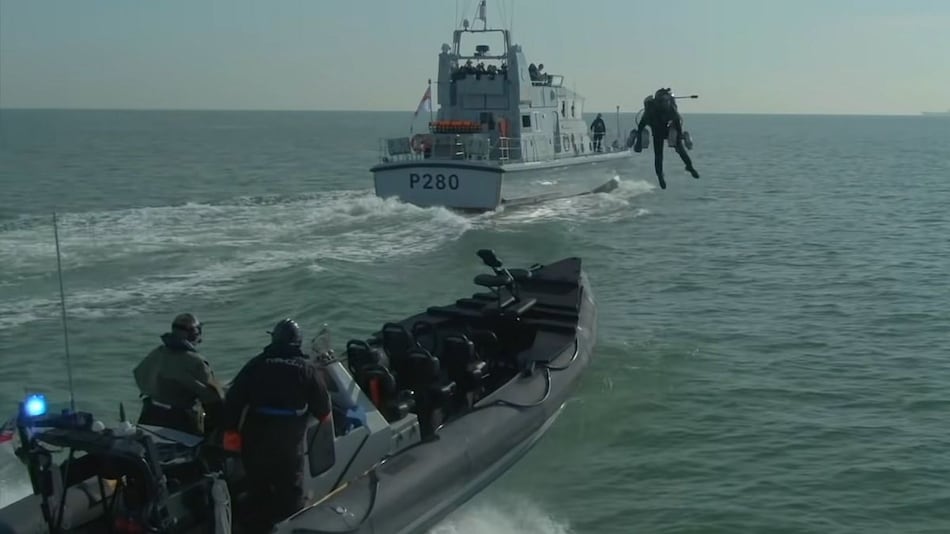 The British Royal Navy is testing futuristic jet suits to help its marines defy gravity and fly – like Iron Man – to board ships moving at a distance, a new video by the UK-based Gravity Industries, the firm behind the suit, showed. The video showed a Royal Marine taking off from a high-speed inflatable boat using the suit, flying above the seas, and then landing on the deck of the navy's offshore patrol ship HMS Tamar. The marine has a machine tied to his shoulders that resembles a backpack, and another cylindrical pair tied to either of his hands.

These machines provide him with enough thrust to launch from the speedboat, fly above the water and balance his movement while he is airborne and during the landing. After he lands on the deck of HMS Tamar, the marine throws out a rope ladder for his colleagues to climb up the ship from their boat.

The Royal Marines simulated a “visit, board, search, and seizure” operation, one of the most complex and dangerous maritime missions. The only other alternative available to the marines was using a helicopter to drop down on the ship. But that would have taken time.

A Business Insider report citing a press release by Gravity Industries said that 42 Commando Royal Marines participated in the exercise, part of a trial which lasted three days. They explored alternative ways to traditional maritime boarding practices. The report added that the British military has not yet decided whether it will buy this technology.

Admiral Tony Radakin, the highest-ranking British navy official, described the suit as the “latest game-changing kit”. The video he tweeted has got more than 548,000 views.

As the @RoyalNavy embraces technology and innovation, @hms_tamar trials the latest game-changing kit with the @RoyalMarines. pic.twitter.com/rckeuom7yg

Paramedics in England's remote and rugged Lake District region previously tested the jet suit to reach out to people in distress. Using the suit saved them a lot of time that they would have otherwise taken had they traveled by road or on foot. The jet suit is still being developed.