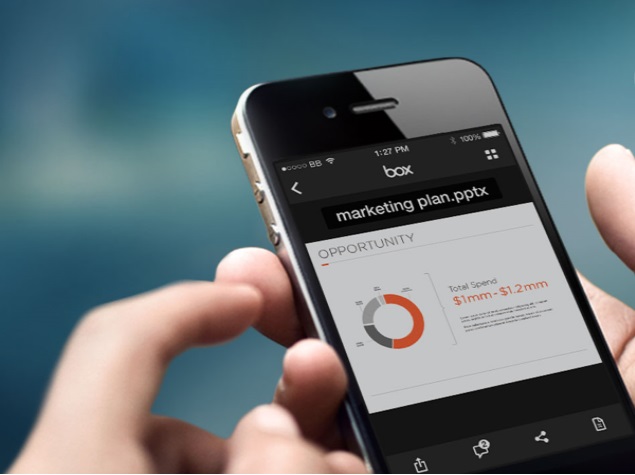 Online storage provider Box has wrapped up its long-delayed IPO at $14 per share, setting up a test of investors' appetite for a rapidly growing technology company that hasn't proven it can make money.

The terms reached late Thursday topped a target range of $11 to $13 per share pegged by Box's bankers last week.

The pricing increase reflects strong demand for the 12.5 million shares sold in Box Inc.'s initial public offering. A more revealing measure of the interest in the shares will come Friday morning when they begin trading on the New York Stock Exchange under the symbol "BOX." If the stock surges, Box's bankers are likely to exercise an option to sell nearly 1.9 million more shares.

Box, though, settled for a lower IPO price than what the company thought it was worth last March. At that time, an internal appraisal estimated the fair value of Box's stock at $17.85 per share, according to the company's IPO filings.

Since then, Box continued to lose money while trying to fend off fiercer competition from bigger companies such as Google Inc., Microsoft Corp. and Amazon Inc. that also are peddling online storage services.

A successful debut by Box in the technology industry's first big IPO of the new year could encourage other hot startups to go public, even if they aren't profitable yet. One of the most hotly anticipated IPO candidates is Dropbox, another online storage provider that was valued at about $10 billion (roughly Rs. 61,409 crores) by investors who participated in its last round of fundraising.

Although it boasts 44,000 corporate and government customers, Box has yet to turn a profit in its 10-year history. The IPO raised $175 million (roughly Rs. 1,074 crores), helping to offset Box's cumulative losses of $483 million (roughly Rs. 2,966 crores) since its founding by college dropout Aaron Levie and his friend, Dylan Smith.

Investors have shown a willingness to back other technology companies with a history of uninterrupted losses. Perhaps the most prominent example is Twitter, the short messaging service that has a market value of $24 billion (roughly Rs. 1,47,383 crores) even though the company still hasn't turned a profit. Twitter's stock closed Thursday at $39.07, a 50 percent gain from its IPO price of $26 in November 2013.

Box is making its stock market debut more than a year after it first filed its plans to go public under a U.S. law that allows smaller startups to keep their IPO documents confidential for a short period of time. The wraps came off the IPO filing last March, but the company postponed the offering a few months later.

Many investors still see tremendous potential in Box because it is among the leaders in online storage - part of a phenomenon known as "cloud computing." The demand to store documents, photos and other digital content in remote data centers so the material can be accessed on an Internet-connected device has been steadily rising as more people rely on smartphones and tablets for their computing needs.

Box specializes in selling online storage to corporate and government customers, who distribute their accounts to their employees. The company now has 32 million total users, some of whom still use a free, bare-bones version of its service. Box lost $129 million (roughly Rs. 792 crores) on revenue of $154 million (roughly Rs. 945 crores) through the first nine months of its current fiscal year ending Jan. 31.

Levie, the company's leader, is a rising technology star known for his pluck and quirky wit. He is also among the breed of young entrepreneurs who believe it is better to take risks pursuing different ideas instead of sticking with the status quo.

"At times, we may get some things wrong, but we respond quickly and fail fast,'" Levie wrote in a letter included in Box's IPO filing. "More often, however, our speed affords us an incredible competitive advantage."

Social Networks Must Help Stamp Out Promotion of Violence, Says France
Huawei Was Never Asked to Spy by China: CEO