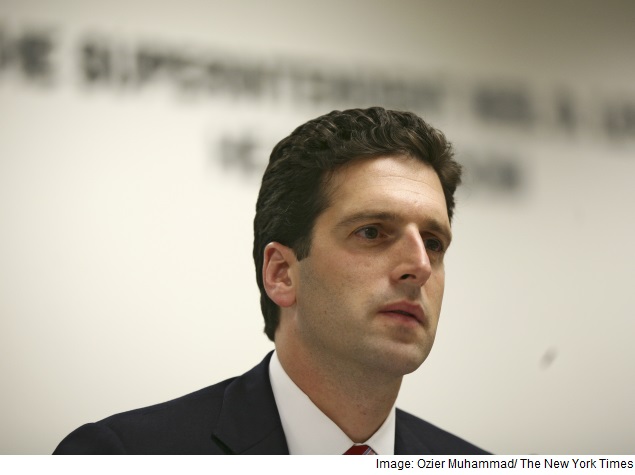 New York state's top financial regulator has granted the first license to a Bitcoin exchange, allowing it to open legally to customers across the country.

The exchange, itBit, said Thursday that it was beginning to take on U.S. customers immediately after receiving a banking trust charter from New York state's Department of Financial Services and its superintendent, Benjamin M. Lawsky, who has been trying for some time to bring new rules to the fledgling virtual currency industry.

In addition to the new license, itBit, which has offices in New York and Singapore, also announced on Thursday that it had won $25 million in new financing and had appointed three prominent board members: Sheila C. Bair, a former chairwoman of the Federal Deposit Insurance Corp.; Bill Bradley, a former New Jersey senator; and Robert H. Herz, a Morgan Stanley director.

The trust company charter gives itBit a banklike status and appears to make it the winner in a race among Bitcoin exchanges to become the first to be fully regulated in the United States.

"This is a big deal, not just for us, but for the entire Bitcoin industry," itBit's chief executive, Charles Cascarilla, said.

In the past, several unregulated Bitcoin exchanges have collapsed under questionable circumstances, tarnishing the public reputation of the virtual currency and losing Bitcoins worth hundreds of millions of dollars.

Earlier this week, an enforcement arm of the Treasury Department fined a virtual currency company, Ripple Labs, $700,000 and said it "willfully violated" the bank secrecy act and failed to report suspicious activity.

Lawsky has been working for more than a year to establish a regulatory procedure to deal with the unusual nature of virtual currencies and the unique security risks that they present. He has proposed a so-called BitLicense and has said he hopes to finalize it later this month.

ItBit avoided the need for a BitLicense by instead applying for a trust company charter, which appears to come with even stricter regulations. It is the first trust company to be created in New York since the financial crisis.

"The technology behind Bitcoin and other virtual currencies could ultimately hold real promise, and it is critical that we set up appropriate rules of the road to help safeguard customer funds," Lawsky said in a statement Thursday. "Indeed, we believe that regulation will ultimately be important to the long-term health and development of the virtual currency industry."

Many Bitcoin companies have been held back by the difficulty of opening accounts with banks, which have been hesitant to deal with the risks of virtual currencies. As a trust company, itBit will be able to be the custodian of customer funds by itself.

The process of obtaining the charter has been arduous and expensive and occupied itBit for more than a year. It has already been operating for foreign customers from Singapore.

Because of the extensive requirements for opening an account with the company, itBit is planning to focus primarily on larger investors and financial institutions.

The company was founded by several people with Wall Street experience, including the chief executive, Cascarilla, who previously worked at Goldman Sachs and Bank of America. The company's chief operating officer, Andrew Chang, came to itBit from Google.

Although the price of Bitcoin has stagnated over the last year, interest in its technology has been growing among large financial and technological companies. Last week, Goldman became the first bank to make a significant investment in a Bitcoin company when it helped lead a $50 million funding round for the Bitcoin payment company Circle.

Many banks are most interested in the financial network, called the blockchain, that allows the Bitcoin digital tokens to be transferred quickly and cheaply.

The focus at itBit will be on allowing customers to buy, sell and hold the digital tokens as an asset, like a sort of digital gold.

Since Bitcoin was released in 2009 by a mysterious creator named Satoshi Nakamoto, the largest exchanges have mostly been outside the United States.

Mt. Gox, an exchange based in Tokyo, was the dominant exchange for years, but it declared bankruptcy last year and said that nearly $400 million worth of customer Bitcoins were either lost or stolen. A criminal investigation is continuing.

Mt. Gox was overtaken by Bitstamp, an exchange based in Slovenia. Earlier this year, though, Bitstamp was hacked and lost about $5 million of Bitcoins.

More recently, a company in San Francisco, Coinbase, said it was opening the first Bitcoin exchange to have all the necessary licenses in the United States. But soon after that announcement, Lawsky's office said that Coinbase did not have the licenses needed to operate in New York.

The Winklevoss brothers, famous from their legal battles with the Facebook founder Mark Zuckerberg, announced their intention this year to open the first regulated U.S. Bitcoin exchange, but that has not come to fruition yet.

Many early Bitcoin users, who were drawn to the virtual currency because of its independence from government, have opposed efforts to win regulatory approval for the technology. But itBit and other companies have said that approach is unlikely to work in bringing virtual currencies into the mainstream.

"While some see Bitcoin as alluring for its potential to operate outside this system, we see it differently," Cascarilla said in a blog post Thursday. "We believe Bitcoin and blockchain technology have immense potential within the system - to help make it more efficient, to offer new solutions and to bring us all into the future."

Women, Don't Get 'Thinspired' on Facebook
USAA Creates Research Team to Study Use of Bitcoin Technology