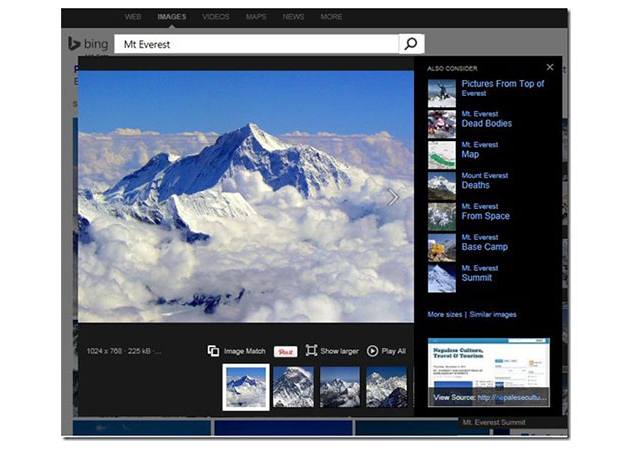 Microsoft on Thursday has announced 'Image Match' functionally for its Bing search engine, almost two years after Google first introduced its 'Search by image' feature. The feature, according to Microsoft, will be rolled to users "over the course of the coming days."

Introducing the 'Image Match' feature in an announcement post on its blog, the Bing Image team said "Searching for the right image can be tough. We're introducing a new feature that allows you to match an image in a few simple clicks."

The 'Image Match' feature essentially helps users alternative resolutions and sizes of a desired image, or similar images. With the new integration in Bing search, users will see an 'Image Match' button at the bottom of the page while browsing images. Click upon the button, Bing search will show users a list of different size images that can be further narrowed down by its size.

Users can also click on the 'Image Match' button near the search box on Bing.com/images and paste the specific image URL, or even upload a popular or well-known image from their device. The search engine will find all the different sizes for the image by its type. The Bing Image team on its blog published a number of screenshots to demonstrate its latest results in Image Search quality.

Google had introduced its 'Search by Image' functionality back in June 2011, which lets users search the web for a particular image in different sizes, or similar images to a particular picture.
Comments