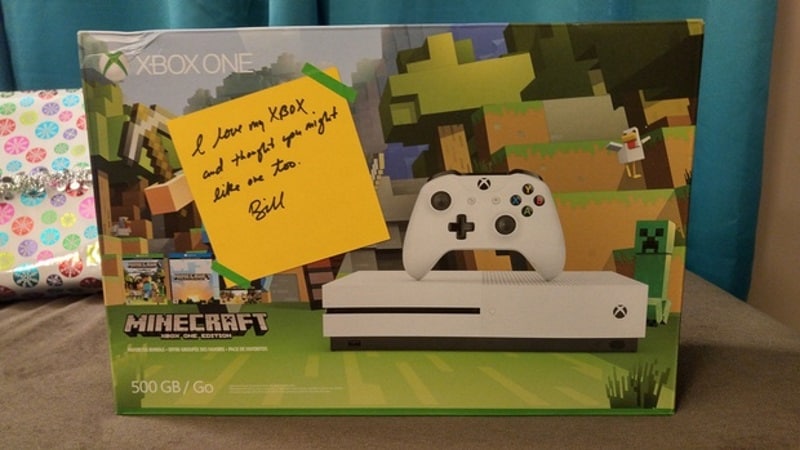 In line with his annual tradition of being a secret Santa on Reddit, Bill Gates has sent out his box full of gifts for an extremely lucky Redditor named Aerrix. Needless to say, when world's richest man becomes your Secret Santa, no Christmas stocking in the world is big enough to hold what he has to offer.

On her profile, Aerrix has written:

"I'm a 30-year-old female who loves all things Internet and video games! I absolutely love the Legend of Zelda series and everything Mario, I just love Nintendo in general. I also LOVE the The Little Mermaid, Harry Potter, League of Legends...video games!!"

Understandably, Gates decided to send Aerrix a Zelda blanket, Zelda slippers for her and her dog, and a Zelda picture frame (with a picture of Aerrix and her husband, as well as Gates photoshopped into it).

Following her other interests from her profile description, Microsoft's co-founder sent out an Xbox One console (Minecraft edition), two games (Halo 5: Guradians and Rise of the Tomb Raider) and three special edition controllers, as per the post by Aerrix on Redditgifts.com.

Interestingly, Gates - the founder, board member, and former CEO of Microsoft - didn't stick to just his own company's products and also sent out an NES Classic Edition video game console as well.

Among other gifts in the box was a Cajun cookbook, a replica of the Master Sword from "Skyward Sword", and copies of three of Bill Gates' favourite movies - The Martian, The End of the Tour, and Believe: The Eddie Izzard Story.

If there is a sense of envy towards Aerrix is already developing within you after reading the article, please try and understand that you are not alone.