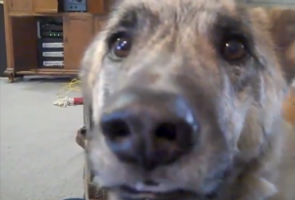 Highlights
An owner teasing its dog on YouTube has become the most-watched viral video of 2011, a media report said Tuesday.

The "Ultimate Dog Tease" was the most watched YouTube video in Britain in 2011, pipping a spoof clip of the wedding of the Duke and Duchess of Cambridge by T-mobile that featured royal lookalikes, the Daily Express reported.

The Alsatian is shown in the video being teased by its owner about food and appears to speak English saying "You're kidding me!" as he is told a beef steak has been eaten.

Third was "Winning" - an edit of actor Charlie Sheen talking on ABC, CNN and NBC about his troubled departure from the show "Two And A Half Men", to music by the Gregory Brothers.

Also on the list was "Nyan Cat", an animation of a cat flying through the air, chanting to synthesised pop music, IT engineer Michael Collings' impressive audition singing Tracy Chapman's Fast Car on the ITV show Britain's Got Talent, and "Talking Twin Babies", showing 18-month-old twins having a gibberish conversation in their parents' kitchen.

YouTube trends manager Kevin Allocca said: "The 10 most-watched YouTube videos of 2011 show that around the world, whatever language we speak, there are certain things that bring us all together around a computer screen or mobile phone - adorable babies, talented performers, and clever advertising."
Comments

Will we see a Google Nexus tablet in the next 6 months?
China probing blast at Apple supplier factory