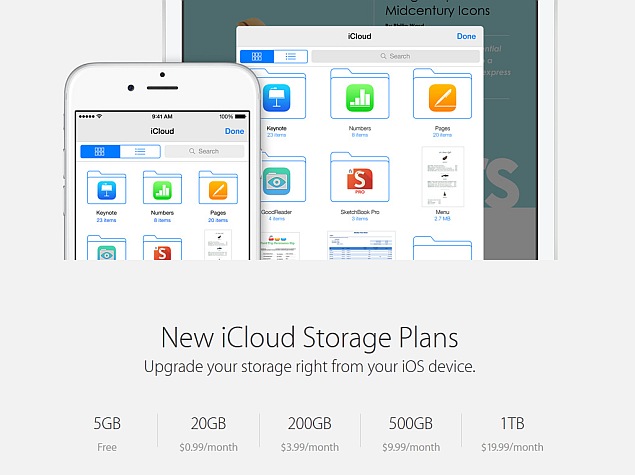 Apple on Tuesday finally announced its iPhone 6, iPhone 6 Plus and Apple Watch, putting an end to months of leaks and rumours. Though not announced at the event, the Cupertino firm has also revised the price tiers of its iCloud service, which has recently been in the news for its role in enabling the huge celebrity photo hacking scandal.

As per the new pricing plans, Apple will still provide 5GB of iCloud storage space to all users at no charge. However, the paid tiers have become a lot more affordable, in line with recent revisions by Google, Dropbox, Amazon and others.

Apple introduced its iCloud Drive feature back in June during the WWDC 2014 event. The new feature will allow users to save documents using any device associated with their iCloud account, not necessarily only through individual apps. Users will be able to browse through their iCloud storage space in the same way that they browse through local folders. Previously, iCloud space was used to save documents which could be accessed from multiple devices, but only through their associated apps. iCloud space is also used for storing device backups and syncing Photo Streams. iCloud Drive will arrive with iOS 8 on the iPhone 6 and iPhone 6 Plus, but will be available to all users across desktop and mobile platforms.

A few hours before the event kicked off, Apple started sending alert emails when users' iCloud accounts are being accessed through a Web browser. The move seemed to be an attempt to restore confidence in Apple's security ahead of the much-anticipated debut of the company's new mobile payments and wallet system, Apple Pay.

Apple's much-awaited Tuesday launch came in the wake of a massive leak of racy nude celebrity photos that sparked widespread criticism from all over the world.