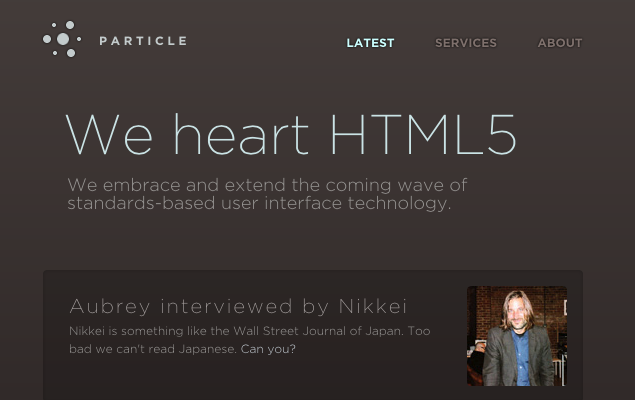 According to a report in CNET, Apple last month completed the purchase of San Francisco-based design firm Particle.

The report indicates that singer-turned-actor Justin Timberlake is one of the investors in the design firm, that boasts  the likes of Google, Motorola, Amazon, Yahoo, Sony, and Apple itself, as amongst its clients. Particle is also behind video sharing social network Robo.to and Intervue.me, an asynchronous video interviewing project.

The report did not reveal financial details of the deal, though did suggest Apple is hiring Particle's talent rather than products.

The deal went through late last month, though not all its less than a dozen employees stayed on to work at Apple. Those who did are listed as "creative technologists" as well as one "user interface engineer," according to their public LinkedIn profiles.

Several of Particle's employees previously worked with Yahoo as part of its user experience design group. Founder and Chief Technology Officer Aubrey Anderson also consulted for Apple between 2006 and 2008, according to his LinkedIn profile.

Particle has previously worked with Apple "around iAds, iTunes Extras, and Apple.com", and it is likely they'll continue to do the same post acquisition.
Comments