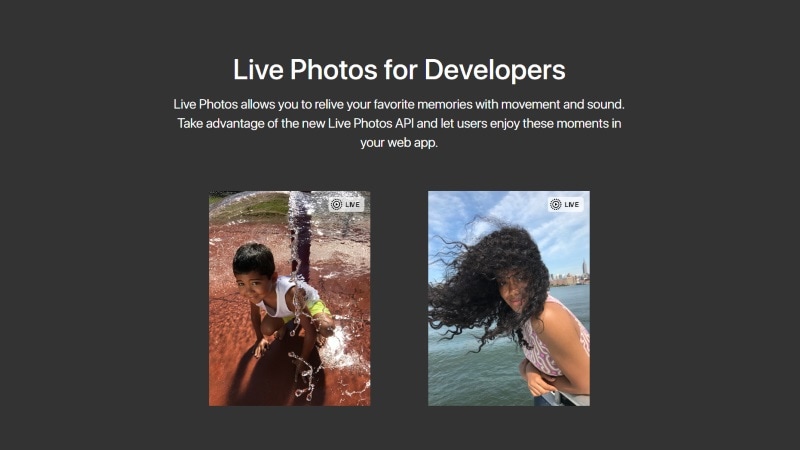 Live Photos is a feature supported by recent iOS devices that captures short video clips when users click pictures. Since their launch, sharing the images on the Web was a cumbersome process, requiring the use of third-party apps. While Tumblr introduced support for Live Photos last year, Apple has now released Live Photos JavaScript API, which will help developers integrate support for the feature to their websites and Web apps.

The newly released LivePhotosKit JavaScript API, which has been made available by the Cupertino-based company on the NPM JavaScript community site, essentially enables websites to support playback for Live Photos.

"The JavaScript API presents the player in the form of a DOM element, much like an image or video tag, which can be configured with photo and video resources and other options, and have its playback controlled either programmatically by the consuming developer, or via pre-provided controls by the browsing end-user," the description of the API says on NPM's website.

Notably, social media platforms including Facebook and Instagram only support Live Photos converted into Boomerangs. As the API has been just released by Apple, we  might have to wait till it is integrated by developers into their websites. The release of the API was first reported by 9To5Mac.

As Apple's devices are used around the world and people are always looking to share their Live Photos, this new API will likely be taken up with both hands with Web developers. Let us know in comments down below whether you like to share looping short videos or stick to the basic still images in old school way.