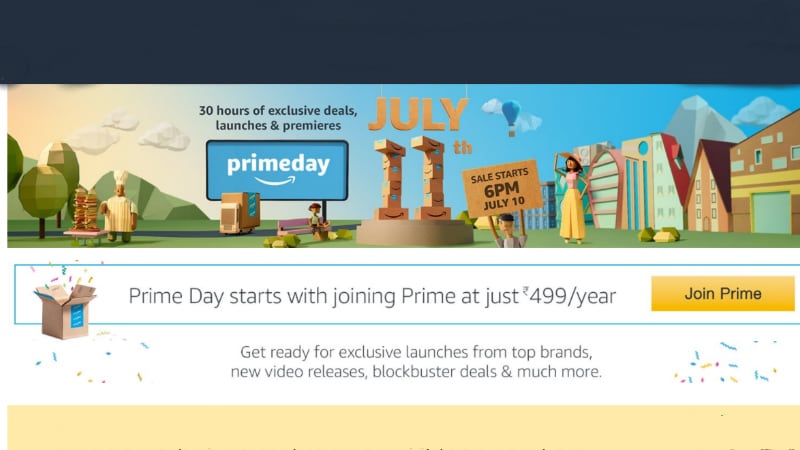 With the pre-GST sales coming to an end, Amazon has announced the dates of its next big sale. Named Amazon Prime Day, this annual sale is rather big event for the company as it is akin to major sale days, such as Black Friday and Cyber Monday. It will be held across 13 countries this year, and the first time in India. The Amazon sale date in India is July 11, and will be open exclusively for Prime members in the country. This year's Amazon sale deals will include exclusive launch offers, cashbacks, and discounts on various products including smartphones, and unlimited one-day and two-day delivery for most products. It will also see original and new content being launched on Prime Video running up to Prime Day.

As mentioned above, this will be the first time the Amazon Prime Day sale in held in India. The Amazon sale will start the evening before in all markets the Prime Day sale is available, i.e., 6pm on July 10, and will go on for 30 hours. Many Prime Day deals will be revealed even earlier, on July 9. The Prime Day event is a huge deal across the globe, and in 2015, it even broke a record set by the famous Black Friday sale. To participate in this sale, you need to be a Prime member, and the membership fee is at Rs. 499 per year. Amazon has announced that the deals will be revealed on July 9 to keep the customer prepared of what they want to buy.

Amazon has confirmed exclusive product launches from 30 brands, including Honor, LG. Sharp, and Lego; but has noted that more brands will be unveiled on July 5. All members making purchases in the Amazon sale will get assured offers worth Rs. 1,100 from MakeMyTrip, BookMyShow. There’s up to 15 percent cashback on HDFC cards (up to Rs. 2,000) on purchases of Rs. 5,000 or more, and up to 20 percent cashback on Amazon Pay balance (up to Rs. 200) on topping the balance after June 29. Buying the Amazon Fire TV Stick will give you Rs. 499 cashback as Amazon Pay balance.

Users can also expect 'thousands of Lightning Deals' apart from popular ‘Deals of the Day' in the Amazon Prime Day sale. For all the notifications running up to the Prime Day event, you can register here.

Coming to Prime Video, there will be a host of exclusive and new content that will be launched running up to Prime Day - from July 5 to July 9. These include Star Trek – Beyond (July 5), Deepwater Horizon (July 6), Baahubali: The Lost Legends, Episode 9 (July 7), Sully (July 8), and Zakir Khan’s stand-up comedy special, Haq Se Single (July 9). On July 10 midnight, Amazon will launch its original Inside Edge on Prime Video as well.

Commenting on Prime Day, Amit Agarwal, SVP and Country Head, Amazon India said, "Prime is our flagship program which brings to members the best of Amazon with unlimited free fast delivery, ad-free video streaming, exclusive selection and deals, and much more. We are humbled by the tremendous response to Prime since its launch less than a year ago. We are thrilled to bring Prime Day to India, curating a special experience for our members with 30 hours of exclusive shopping and new streaming content."

Along with India, China and Mexico will also join the celebration for the first time. The global Prime Day event will be held in 13 countries simultaneously, and these countries include - US, UK, Spain, Mexico, Japan, Italy, India, Germany, France, China, Canada, Belgium, and Austria.

Petya Ransomware: Fresh Cyber-Attack Likely 'More Sophisticated' Than WannaCry, Says Europol
R.I.P. Gchat: You Let Us Pretend We Were Working - and That We Were Really Connecting