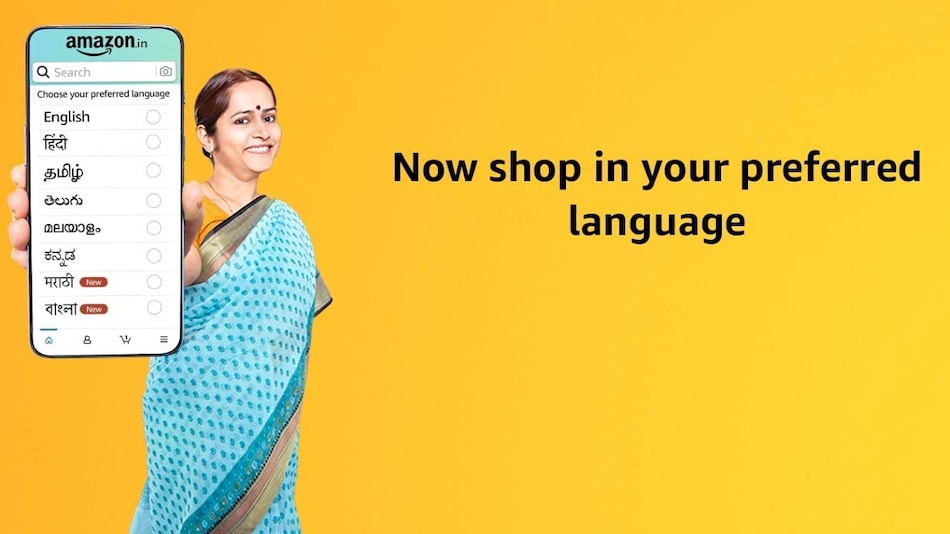 Amazon on Monday announced Bengali and Marathi as two new Indian languages for shopping on its e-commerce site. With the new update, Amazon has started supporting a total of seven Indian languages, namely Bengali, Hindi, Kannada, Malayalam, Marathi, Tamil, and Telugu. The US e-commerce giant also announced the addition of Hindi to its voice-based shopping experience that it launched last year in English. The new announcements come just ahead of the shopping season in the country and a few days before the launch of Amazon's Great Indian Festival sale.

Expanding Indian language support that received Kannada, Malayalam, Tamil, and Telugu last year, Amazon has brought Bengali and Marathi as the new regional languages for customers shopping through its e-commerce site. These languages are available alongside English and are aimed to attract and support new customers.

Kishore Thota, Director of Customer Experience and Marketing at Amazon India told Gadgets 360 that using the existing Indian language support, over five million customers shopped with Amazon in 2021 alone. He added that the languages the company had added so far are spoken and engaged by more than 80 percent of Indian households.

“Our primary objective is how to take the convenience of Amazon and everything it offers to every single Indian across the country, wherever they may be, whatever their capabilities may be, or preferences may be,” Thota said in an interview.

The executive further said that over 65 percent of Amazon orders and 85 percent of its new customers are from tier two or below geographics. Amazon is aiming to convert its regular visitors into buyers by enabling Indian language support.

Users can switch to any of the Indian languages by going to Country & Language settings from the Amazon app or its website.

Late last year, the demand to add the support for Marathi on Amazon was raised by Raj Thackeray's Maharashtra Navnirman Sena (MNS), creating controversy. The Seattle, Washington-based company at that time had promised to bring support for the language “soon.”

Thota suggested that the controversy wasn't the reason for the company to bring Marathi on board.

“We launched four major South Indian languages last year, and if we generally look at a roadmap of languages, probably Marathi and Bengali would have come next,” he said. “So, it was just a natural evolution of introducing new languages.”

Alongside new Indian languages for shopping online, Amazon is bringing Hindi support to its voice-based experience as an extension to the English part that it introduced in March last year. It will allow users to use their voice in Hindi to search for products or check their order status.

The experience will still be limited to Android users as Amazon sees Android domination on its customer base. However, Thota did say that an iOS version of the voice-based shopping experience was in the works and would soon be available.

Amazon is also working on bringing the experience in more Indian languages over time.

“It's an investment we're making to understand and learn from shopping in Hindi,” Thota said.

In March, Amazon rival Flipkart introduced voice search support in both Hindi and English languages on its platform. The Walmart-owned company also last year launched Kannada, Tamil, and Telugu in addition to English and Hindi to reach new customers in the country. It recently expanded that Indian language support on the marketplace by bringing Assamese, Bengali, Marathi, and Punjabi, among other languages.

iOS 15, iPadOS 15, watchOS 8 Release in India Today: How to Download, New Features
Christie’s to Hold Auction of Some of the Oldest NFT Art — With Live Bids in ETH