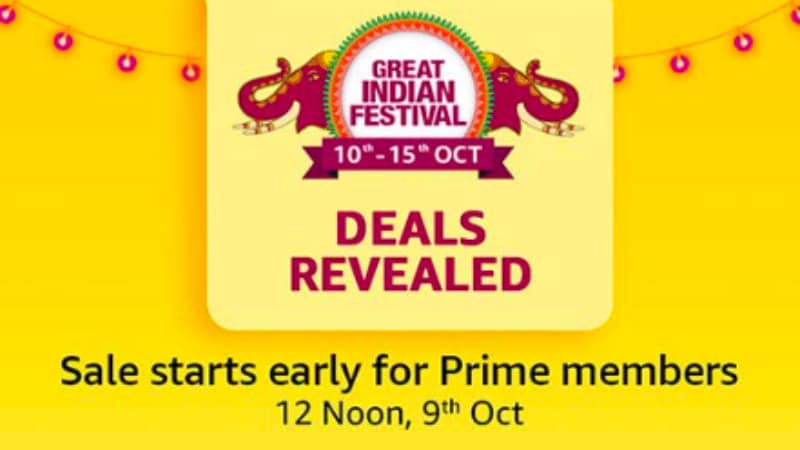 Amazon is all set to go live with its 2018 edition of the Great Indian Festival online sale that will entail huge discounts, cashback, and exchange offers on thousands of products across categories such as electronics, smartphones, home appliances, and more. The online marketplace has now gone ahead and previewed a lot of its major deals just a few hours before the sale goes live. To recap, the Amazon Great Indian Festival sale will start for Prime members from 12pm on October 9, and for all other users from 12am midnight on October 10. Let’s get into the deals now.

Earlier this week, Amazon had revealed deals on several smartphones from brands like Honor, Samsung, Motorola, and more. It had also teased the upcoming pricing for the Realme 1 and Redmi Y2. Amazon has gone ahead and announced that the Realme 1 will be sold at a starting price of Rs. 10,490. The Redmi Y2 will be sold at Rs. 8,999 for the 32GB storage variant and Rs. 10,999 for the 64GB storage model. Xiaomi's Mi A2 is also up for grabs at a discounted price of Rs. 14,999, which is its first price cut ever since the phone was launched in India earlier this year.

Moving on to Amazon devices, the Fire TV Stick streaming gadget will be sold at a price of Rs. 2,799; the Kindle Paperwhite gets an offer price of Rs. 8,249; and Kindle Unlimited subscription can be availed for Rs. 1,388, down from its original Rs. 2,388 price tag. These three deals are exclusive to Prime members, available only between 12pm on October 9 and 12am on October 10. For rest of the users, the all-new Echo Dot will be available for a price of Rs. 2,999, down from its launch price of Rs. 4,499. Other than that, the second-gen Echo Dot can be bought for Rs. 2,449 in Amazon’s Great Indian Festival 2018 sale. Offer is valid till stocks last.

In terms of television deals, the Amazon exclusive BPL 32-inch TV will be sold at its lowest ever price. BPL will also hold a flash sale which will see a TV and Fire TV Stick combo being sold for as low as Rs. 11,990 starting 9pm on October 10. Additionally, up to 40 percent discount is being offered on LG OLED TVs along with an early bird Rs. 5,000 Amazon Pay cashback offer. Lastly, Mi TV 4C Pro and Mi TV 4A Pro models go on sale from 9pm on October 9.

As for other consumer electronics, JBL’s 2.0 wireless soundbar will be sold for Rs. 7,999, Bose QC25 noise cancelling headphones will start at Rs. 12,600, Sony Alpha mirrorless cameras at Rs. 34,990 (with free Sony XB10 Bluetooth speaker worth Rs. 4,990), and the affordable JBL Go speaker for Rs. 1,399. Minimum 40 percent off is being offered on WD and Seagate hard drives with capacities above 2TB, and up to 50 percent on select printers.

Over and above all these deals, users can avail 10 percent instant discount on payment via SBI debit cards, credit cards, and EMI plans. You can also get flat Rs. 300 cashback when you top up your Amazon Pay balance above Rs. 3,000 in one go. Amazon is also offering free delivery - irrespective of order amount - or non-Prime users, only for their first order.