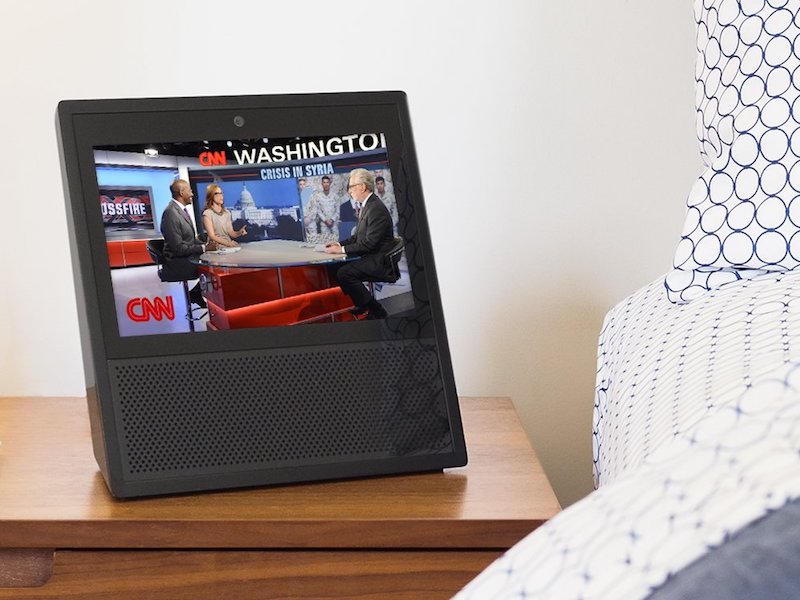 Amazon is giving its voice-enabled Echo speaker a touch screen and video-calling capabilities as it competes with Google's efforts at bringing "smarts" to the home.

The 7-inch screen on the new Echo Show enables the speaker to supplement voice responses with visuals and other information displays , similar to the Echo-like features on the Fire tablets and Fire TV streaming devices.

That could mean extended weather forecasts, not just current conditions, or music lyrics to go with the song you're listening to. You can also call up cooking tutorials on YouTube, hands-free, while making dinner in the kitchen.

You'll also be able to make video calls with other Echo Show devices or the Alexa app for iPhones and Android phones. Two previous models, the original Echo and the smaller Echo Dot, will get audio calling only, as they lack screens and cameras. Video and audio calls will be free.

The market for voice-assisted speakers is small, but growing. The research firm eMarketer expects usage of such speakers to more than double this year, with nearly 36 million Americans using such a device at least once a month by year's end.

Amazon's Echo is expected to continue its dominance, with a share of nearly 71 percent, though eMarketer expects Google's Home speaker to cut into that share over time.

A few weeks ago, Google Home got the ability to recognise individuals within a family by voice, allowing for more precise recommendations and ad targeting. So far, Amazon doesn't have a comparable voice-recognition feature.

On the other hand, Google Home doesn't have a screen or video calling.

All Echo devices can respond to voice requests for weather, news, music and other tasks. The original device, simply called Echo, is currently on sale for $150 (roughly Rs. 9,700). The speaker on the $50 Echo Dot isn't as good, as it's meant to be used with speakers you may already own. The $130 Amazon Tap is a battery-powered version.

Two weeks ago, Amazon unveiled the Echo Look, a device focused on offering fashion advice. It's available by invitation only for $200. Neither the Look nor the Tap will handle calls.

Amazon and Google will get a new rival this fall: On Monday, Microsoft and Samsung's Harman business teased an upcoming speaker, called Invoke, powered by Microsoft's Cortana digital assistant.

Nokia Phones' India Success, WhatsApp Encryption, OnePlus 5 Teased, and More: Your 360 Daily
How to Use System Restore on Windows 10 Computers