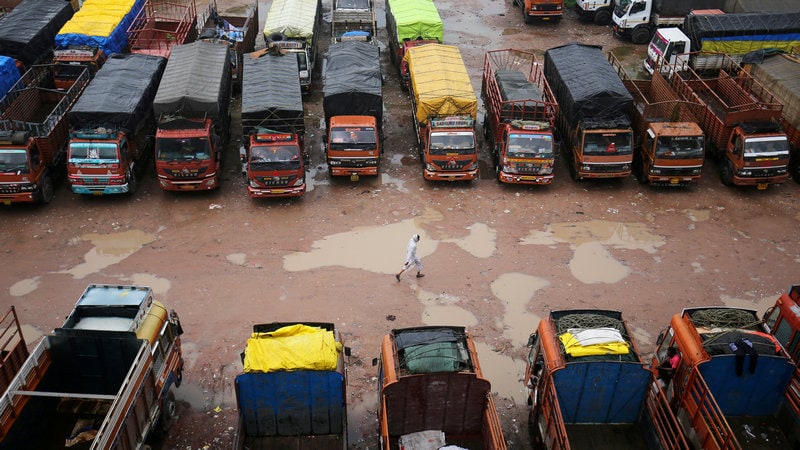 A truckers' strike across India has affected deliveries for e-commerce firms such as Amazon and Snapdeal, hurt cotton trade in the world's biggest producer of the fibre and disrupted the movement of grains and vegetables.

The strike began on July 20 just days after Amazon and home-grown Flipkart, which is being acquired by US retail giant Walmart, concluded their annual sale.

The All India Motor Transport Congress (AIMTC), the body which has organised the strike, is demanding a cut in federal and state levies on diesel by bringing the fuel under the scope of the nationwide Goods and Service Tax.

"The delivery of products in a few cities has been impacted and we are working closely with these customers to get their orders to them quickly," an Amazon spokeswoman said.

India's Snapdeal, which counts Japan's SoftBank Group among its investors, said the slowdown of long-haul transportation had hit some of its deliveries in northern and western India.

"We have partially mitigated delays by re-allocating shipments as per operational capacities of our logistics partners," a spokesman for Snapdeal said, adding that it had informed buyers and sellers about the delays.

Commodities trade in India has also been hit.

Cotton ginning factories are on the verge of closure because of the lack of raw material, said Atul Ganatra, president of Cotton Association of India.

"The shipment of cotton has stopped, leading to non-fulfilment of obligations by the exporters resulting in the problems of cancellation and delayed shipment," Ganatra said.

China, Bangladesh, Vietnam and Pakistan are the main buyers of Indian cotton.

Supply of vegetables like onions and potatoes has also fallen in big cities including financial capital Mumbai and national capital Delhi.

Some vegetables such as potatoes have become costlier, but the rise is modest for now as traders have leftover stock, said a Mumbai-based trader.

"That inventory is now depleting. If the strike continues for a few more days, then prices will rise sharply," the trader said.

Potato prices in Delhi have risen 29 percent in a week, according to data compiled by the National Horticulture Research and Development Foundation.