After Strong Debut, China's Alibaba Worth More Than Amazon and eBay Combined 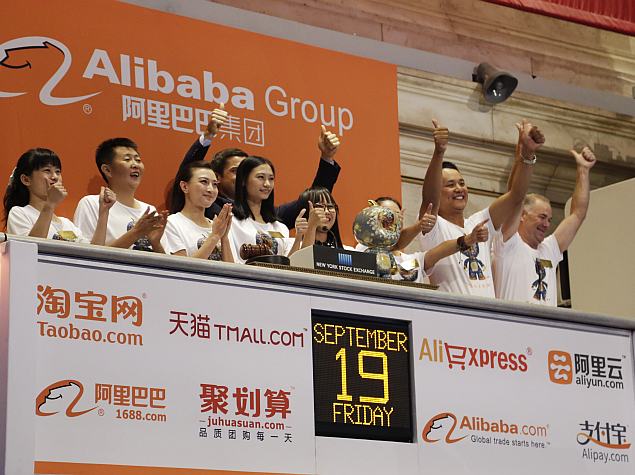 Alibaba Group Holding Ltd's shares soared 38 percent in their first day of trading on Friday as investors jumped at the chance for a piece of what is likely to rank as the largest IPO in history, in a massive bet on China's burgeoning middle class.

It was an auspicious debut for the Chinese e-commerce company, which was founded by Jack Ma in his apartment in 1999 and now accounts for 80 percent of online sales in China.

About 100 people gathered outside the New York Stock Exchange at Wall and Broad Streets, many of them Chinese tourists with cameras, and they cheered and snapped photos when Ma exited the building with the kung fu star Jet Li.

The stock opened at $92.70 shortly before noon ET (1600 GMT) and quickly rose to a high of $99.70, before paring gains to close at $93.89. Some 271 million shares changed hands, more than double the turnover on Twitter Inc's first day last year, although still short of volume for the General Motors Co and Facebook Inc IPOs.

"This is the most anticipated event I've ever seen in my 20-year career on the floor of the NYSE," said Mark Otto, partner with J. Streicher & Co, who trades on the NYSE floor. "I think today's move is sustainable: The company is profitable, unlike some of its competitors, and it is a way for traders to tap into the Chinese growth story."

The pricing of the IPO on Thursday initially raised $21.8 billion for Alibaba. Scott Cutler, head of the New York Stock Exchange's global listing business, told CNBC that underwriters would exercise their option for an additional 48 million shares, to bring the IPO's size to about $25 billion, making it the largest initial public offering in history.

But a source close to the matter said the underwriters would make a final decision on whether to exercise the option over the next week or two, based on how the shares trade over the next few sessions.

Alibaba is nearly unknown to most Americans but is ubiquitous in China. The company, which operates China's largest Internet shopping destination, Taobao, and retail site Tmall.com, earned $3.7 billion in the 12 months ended March 31, 2014, up about $2 billion from the prior 12-month period.

At its closing share price on Friday, Alibaba has a market value of $231 billion, exceeding the combined market capitalizations of Amazon and eBay, the two leading U.S. e-commerce companies.

Alibaba is valued at 39 times its estimated earnings per share for its current fiscal year, which ends in March. That is right in line with Facebook's valuation of 39 times forward earnings but nowhere near the lofty valuation of Amazon.com's multiple of 264, according to Thomson Reuters Starmine data.

Trying to chart the stocks future
The future path of Alibaba's shares is truly uncharted territory.

"It's very difficult to predict," said Stephen Massocca, managing director at Wedbush Equity Management LLC in San Francisco. "Is it going to trade based upon its true fundamental value, or is it going to become one of these cult stocks a la Tesla or Solar City, or some of these names where there really isn't a fundamental grounding to the valuation?

"And it's very difficult to see what bucket these guys are going to fall into," Massocca added. "My guess is there's a very high likelihood it does fall into this bucket, which would lead you to believe it does trade higher. But if you were to base it on a fundamental valuation, I would call it slightly overvalued at this price."

Morningstar analyst RJ Hottovy said that while he expected Alibaba to further grow revenues, it was entering an aggressive new investment stage that would likely pinch margins over the next couple of quarters.

Ma, a former English teacher who is now the company's executive chairman, boasts a personal fortune of more than $14 billion on paper, vaulting him into the ranks of such tech billionaires as Bill Gates and Jeff Bezos. The deal is also expected to make millionaires out of a substantial chunk of Alibaba's managers, software engineers and other staff.

The rise in the stock exceeds the average gain by new IPOs on U.S. exchanges of late. In the second quarter, the average first-day gain was 9.2 percent, according to Renaissance Capital IPO Intelligence. Underwriters usually aim for a gain of 10 percent to 15 percent on the first day.

Demand was intense among retail investors. J.J. Kinahan, chief market strategist at retail brokerage TD Ameritrade Holding Corp, said the company received customer orders amounting to about 70 percent of what it saw for Facebook and about three times the customer orders it had for Twitter's IPO.

Assuming underwriters elect to sell additional shares, the company's initial public offering will become the largest in history, surpassing listings by Agricultural Bank of China Ltd's in 2010 and by ICBC, another Chinese lender, in 2006.

What happened in Hong Kong
Alibaba Group's orange banners were festooned around the exchange, with its logo on NYSE computer screens. Ma watched several long-time customers ring the opening bell at 9:30 a.m.

"I don't want disappointed shareholders, I want to make sure they make money," Ma said of the pricing, on CNBC, adding that he worries most about keeping customers happy.

Similar euphoria greeted Alibaba.com when its stock debuted on the stock exchange in Hong Kong in November 2007 on the eve of the global financial crisis. The stock more than tripled on day one, but five years later Ma delisted the company at the IPO price after failing to impress investors.

The NYSE held extensive tests ahead of the hotly anticipated offering to ensure it would be able to handle heavy trading volume. A call on Friday with periodic updates on order matching and trading continued until about noon ET.

"We've had a lot of major IPOs, and when you have one it's always the biggest until the next biggest one comes along," said Ted Weisberg, floor trader with Seaport Securities in New York, who has been a member of the NYSE for 45 years.

The deal allows cornerstone Alibaba investors such as Japan's Softbank Corp and Yahoo Inc to profit from getting in on the ground floor at the company. Yahoo sold some $8 billion worth of shares in the offering, leaving it with a 16.3 percent stake. Shares of Yahoo were hit on Friday, dropping 2.7 percent.

Softbank is not selling for now and will be left with a 32 percent stake, making it the largest single shareholder.

In a measure of the mystique the Alibaba name carries with investors, shares in advertising company Chinanet Online Holdings Inc soared 92 percent to $1.96 after it announced discussions were under way with Alibaba to offer digital advertising services to its online shopping site Taobao.