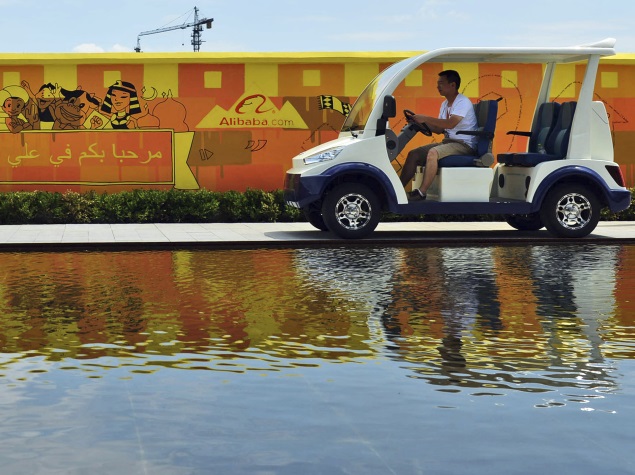 Alibaba Group Holding priced its initial public offering at $68 a share, the top end of the expected range, raising $21.8 billion on Thursday, in the latest sign of strong investor appetite for the Chinese e-commerce juggernaut.

At that price, the IPO, one of the largest-ever, would give Alibaba a market valuation of $167.6 billion, surpassing American corporate icons from Walt Disney Co to Boeing Co. The offering also vaults it atop U.S. e-commerce rivals like Amazon and eBay and gives it more financial firepower to expand in the United States and other markets.

"I'd put them (Alibaba) in a class of Facebook and Google with the scale they have, growth prospects and profitability," said Scot Wingo, CEO of e-commerce software provider ChannelAdvisor. "There's a scarcity value there."

An Ipsos poll conducted for Thomson Reuters found that 88 percent of Americans had never heard of the Chinese e-commerce company, which is responsible for 80 percent of online sales in the world's second largest economy and works with a number of businesses there including consumer online marketplace Taobao and payment service Alipay.

But that didn't sap enthusiasm among multiple large U.S. institutions, including Blackrock, which put in orders for allocations of at least $1 billion in shares, according to the sources.

Between 35 and 40 institutions placed orders for $1 billion or more shares each, investors briefed on the matter said.

Keen to buy into China's rapid growth and evolving Internet sector, investors have been clamoring to get shares since top executives at Alibaba, including Ma, kicked off the road show last week.

"It was one of the more impressive IPO presentations," said Jerry Jordan, manager of the $48 million Jordan Opportunity Fund. "I didn't realize just quite how successful they are."

Based on the amount raised so far, Alibaba's IPO is the third-largest ever behind Agricultural Bank of China Ltd's record $22.1 billion listing in 2010 and ICBC's $22 billion flotation in 2006.

If underwriters exercise an option to sell more shares, as many expect, Alibaba's will surpass both Chinese lenders to become the largest-ever. Alibaba and certain other shareholders also granted underwriters a separate 30-day option to buy up to an additional 48 million shares.

Many investors reported difficulty in getting the full allocation of shares they were aiming for.

John Boland, president of Maple Capital Management in Montpelier, Vermont said he had put in orders for about 5,000 Alibaba shares on behalf of high net worth individuals and institutions and had been told the offer was oversubscribed and that they would probably not get the full order.

"Beating the rush doesn't count in this game," Boland said.

Alibaba's revenue surged 46 percent in the April to June quarter on strong gains in its mobile business, with net income attributable to its shareholders nearly tripling to $1.99 billion, or 84 cents a share.

Ma, who founded the company in a one-bedroom apartment, will have a paper fortune worth some $14 billion, vaulting him into the ranks of tech billionaires like Bill Gates and Jeff Bezos. The deal is also expected to make millionaires out of a substantial chunk of the company's managers, software engineers and other staff.

In addition, it allows cornerstone Alibaba investors like Japan's Softbank and Yahoo to profit from their foresight in getting in on the ground floor at the e-commerce giant. Yahoo is selling some $8 billion worth of shares in the offering, leaving it with a 16.3 percent stake. Softbank is not selling for now and will be left with a 32 percent stake, making it the largest single shareholder.

The successful IPO sets the stage for Alibaba shares to make their debut on the New York Stock Exchange on Friday, with many investors and analysts betting that there is still room for a substantial first-day jump in the shares.

One investor said that the IPO's underwriters, who include Credit Suisse Group AG, Citigroup Inc and Goldman Sachs Group Inc, were hoping for a first day "pop" of 10 to 15 percent. That's about in line with the norm for IPO debuts, whose underwriters typically seek an increase large enough to signal healthy demand but not so much so that it looks like the company and its investors "left money on the table."

Other big Chinese Internet stocks have performed well in U.S. markets, including Baidu Inc, whose shares rocketed 354 percent on their first trading day in 2005.

Underwriters on the Alibaba deal also include Morgan Stanley and JPMorgan Chase & Co, with Rothschild, which does not have underwriting operations, advising Alibaba on the deal.

Still, concerns that an opaque corporate governance structure and Ma's outside investments will stymie minority investors' rights could limit the upside around the deal.

"Rarely in history has there been an IPO of this size for a company that we know less about," Senator Bob Casey, Democrat of Pennsylvania, said in a statement on Wednesday. "I continue to be concerned that about the level of transparency from Chinese firms listing in our markets."

Alibaba is selling 320 million shares, equivalent to about 13 percent of the company's capital. Nearly two thirds of those shares are being sold by existing shareholders including Ma, who will reap $867 million.