A hacking case becomes a war of the tabloids 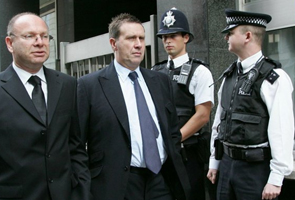 Highlights
It was a classic tabloid scoop: a young woman's account of a two-year affair with the actor Ralph Fiennes, spiced up with racy details of what he liked to do and how he liked to do it.

Three newspapers -- The Sunday Mirror, The Mail on Sunday and News of the World -- carried their versions of the tale on February 5, 2006.

The first two papers obtained the story via the normal tabloid route, paying the woman, Cornelia Crisan, 35,000 pounds to tell all.

But it appears that News of the World, furious at the prospect of being outmaneuvered, took a sneakier approach: It illegally hacked into the voice mail messages of Ms. Crisan's press agent, Nicola Phillips, and stole the story, according to allegations in a new lawsuit.

The details of how News of the World went about its operation are soon to be made public as part of the lawsuit, brought by Ms. Phillips against the newspaper and its parent company, News Group Newspapers, a subsidiary of Rupert Murdoch's News International.

Court papers in the case, as described by people familiar with the lawsuit, shed a stark and unflattering light on the newspaper's reliance on phone hacking as a standard reporting method. This conduct is at the heart of a growing array of civil lawsuits and criminal inquiries against the paper and News Group.

Until recently, News of the World maintained that the hacking had been limited to a single "rogue reporter," the paper's former royals editor, Clive Goodman. Mr. Goodman was jailed in 2007, along with a private investigator, Glenn Mulcaire, after both pleaded guilty to illegally intercepting the messages of members of the royal household.

But the paper's assertion was undermined last month when it dismissed Ian Edmondson, the paper's assistant editor for news, after he was apparently linked to phone hacking in court papers in a lawsuit brought by the actress Sienna Miller, who also alleges that her messages were illegally intercepted.

Also late last month, Mr. Edmondson's former boss, Andy Coulson -- News of the World's editor when hacking seems to have been at its height -- resigned as Prime Minister David Cameron's communications director, saying that continued speculation about his possible role in the scandal was interfering with his job. Mr. Coulson continues to say he knew nothing about the hacking.

Chris Bryant, a Labour member of Parliament who believes his phone was hacked and has sued to force a judicial investigation of the police's handling of the case, predicted that with more cases coming up, there would be a flood of new information. "I think there's a massive scandal still to unfold," Mr. Bryant said.

Ms. Phillips's lawsuit is just one of many. Among the celebrities suing or considering suing are Ms. Miller; her stepmother, the interior designer Kelly Hoppen; the actor Steve Coogan; a sports agent named Skylet Andrew; and Chris Tarrant, the host of Britain's "Who Wants to Be Millionaire." At least a half-dozen more public figures have consulted lawyers and are said to be preparing suits.

After being accused of dragging their feet, the Metropolitan Police have reopened their criminal inquiry, and prosecutors are formally investigating the police's initial response to the case.

For years, some reporters at other newspapers have been suspected of hacking messages, but in recent years, only News of the World has been sued by hacking victims.

A hearing is scheduled for later this month for Ms. Phillips's lawsuit. Like her case, the other cases beginning to wend their way through the courts bolster the perception that hacking cellphones was a regular part of News of the World's news gathering operation, something its executives have denied for the past five years.

Evidence in Ms. Phillips's case also suggests that Mr. Edmondson, the former news editor, had a central role in the hacking operation. The name "Ian" appears in court papers on several photocopied pages from the notebooks of Mr. Mulcaire seized by the police in August 2006.

The new documents, people familiar with the case say, support allegations that Mr. Edmondson specifically directed Mr. Mulcaire to gain access to Ms. Phillips's phone -- and may have hacked her phone himself.

Mr. Mulcaire and Mr. Edmondson are named as co-defendants in Ms. Phillips's suit, along with News Group. Reached by telephone, Ms. Phillips, 30, refused to comment or to disclose any details of the suit, saying she did not want to jeopardize her court case.

Mark Lewis, the lawyer for Ms. Phillips, also refused to discuss the particulars of the case.

Mr. Edmondson, speaking through his lawyers, has denied any wrongdoing.

"We're not making any comment on the current litigation," said a spokeswoman for News International, speaking on the condition of anonymity according to company policy. Referring to Mr. Edmondson, she added, "News International reiterates that, if presented with evidence of wrongdoing, we will take swift and decisive action -- as demonstrated by last week's dismissal of a senior staff member."

In 2006, when she says her phone was hacked, Ms. Phillips worked for Max Clifford Associates, press agents who mediate between people peddling stories -- the sexier the better -- and papers willing to pay for them.

Such checkbook scoops are the bread and butter of Britain's sharp-elbowed tabloids, and News of the World, with its deep pockets and aggressive methods, is among the most eager consumers. But at the time, Mr. Clifford was not doing business with the paper, which had angered him by writing unflattering articles about one of his clients.

So when Ms. Crisan, a blond, buxom Romanian singer, came forward to talk about how Mr. Fiennes had cheated on his girlfriend with her, Ms. Phillips took the scoop to News of the World's competitors. She negotiated a deal with The Sunday Mirror and The Mail on Sunday, which together spent 35,000,pounds or about $62,000, for exclusive access to Ms. Crisan.

The money bought many titillating details. "He Stripped Me Slowly and Then Said, 'Keep Your High Heels On,' " was the headline in The Sunday Mirror.

The Mail on Sunday related how Ms. Crisan irritated Mr. Fiennes by revealing that "Maid in Manhattan" was the only movie she had seen him in. When she then rented "The End of the Affair," she said, she found to her dismay that Mr. Fiennes had used the same lovemaking techniques with her that he had used with Julianne Moore in the movie. "It made me wonder how genuine it was when he did this with me," she told the paper.

Unbeknown to The Mirror and The Mail, News of the World already had the story, without paying for it. The suit alleges that News of the World found out about Ms. Phillips's negotiations by hacking into the messages on her phone and on the phones of her contacts, including reporters for The Mail and The Mirror, Ms. Crisan and Mr. Clifford. (News International agreed to pay Mr. Clifford 1 million pounds after he filed his own hacking lawsuit.)

Mr. Mulcaire's notes reveal that News of the World also listened to personal messages left by and for Ms. Phillips and her friends.

News of the World managed to track down Ms. Crisan on a train from London to Edinburgh in time to publish an article on the same day as the other papers. The headline in its story, under the bylines of Holly Jarvis, Neville Thurlbeck and Neil McLeod, was "Another Fiennes Mess."

The suit also reveals how in Britain's dog-eat-dog tabloid world, ethical reporters buy stories, but unethical ones steal them.

Brendan Montague, a former freelance journalist who often sold stories to News of the World, claims that the paper hacked into his voice mail messages to spoil his efforts to sell the story of a sex scandal involving a celebrity chef to one of its rivals -- thus depriving him of a 30,000 pound fee.

Last year, he said he was not surprised by the hacking, but was stunned by "the fact that this process is so simple, swift and apparently routine," he wrote in the newspaper The Guardian.