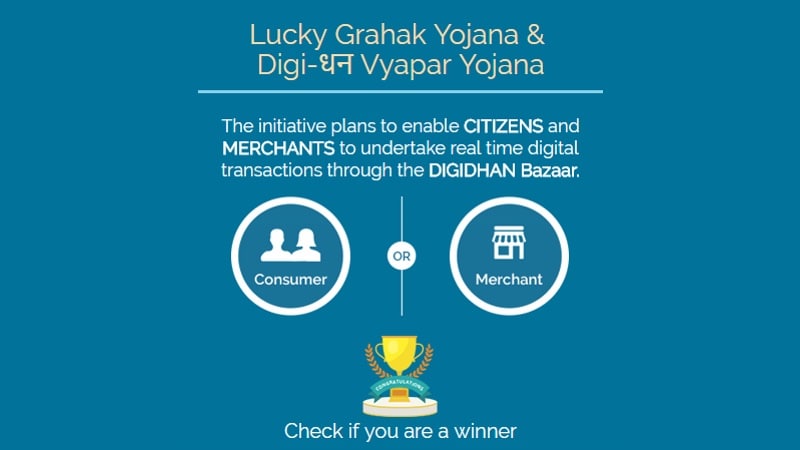 A total of 15,000 winners have been selected from eight crore digital transactions as part of the government's efforts to incentivise and boost digital payments in the country.

"A total of 15,000 winners were selected under 4 broad categories from the 8 crore digital transactions that took place between November 9, 2016 to December 21, 2016," a statement said.

"NPCI announced that the winners of the lucky draw will receive a message from their banks and the reward money will be credited into their bank accounts over the next 24 hours.

Citizens may check if they have received the reward by logging on to: www.digidhanlucky.mygov.in," the statement said.

With incentive schemes like Lucky Grahak Yojana and Digi Dhan Vyapar Yojana, the government hopes to provide a fillip to uptake of digital payments.

Winners of the Lucky Grahak Yojana and the Digi Dhan Vyapar Yojana will be selected on a daily and weekly basis respectively, leading up to a mega draw on April 14, 2017.

A separate statement said the Ministry of Electronics and Information Technology (MeitY) had rolled out the campaign in the tribal village of Palnar, a small village located in the naxal-hit region of Dantewada in Chhattisgarh.

Palnar - which has a population of 1,961 people - was visited by a team of bankers, district officials and technical officials who educated and convinced merchants and people to adopt digital payments.

The teams also extended their support to the merchants by enabling them to get Point-of-Sale (PoS) from banks and were also given training on the usage.

The Common Service Centres acted as micro ATM for the villagers, the statement said.